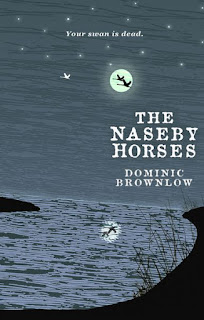 Welcome to my stop on the blog tour for The Naseby Horses, the debut novel by Dominic Brownlow. Despite having a copy of this amazing sounding book, time constraints have meant that unfortunately I haven't had the time to read it yet, so today I'm  hoping to entice you to pick up a copy for yourself with an excerpt.


It’s another day and a night before they let me leave the hospital. Uncle Pete picks me up in his black Rover, driving slowly over the chain of mini roundabouts that gets us out of Spalding on to the straight lonely roads of the Fens. There’s still been no word from Charlotte.

‘Hobby,’ he says, ducking his head to look at a small bird of prey hovering by the side of the road. The hobby drops to the ground, bouncing back into view with a field mouse locked in its talons, before disappearing low across the fields. I press my head against the warm glass, my mind weighed down with the hazy fug of medication, and watch the earth stream by in an endless blur of yellow and green and gold.

Above stretch millions of square miles of unsullied blue sky.

Years ago, in my grandfather’s living room, I read that the mean radius of the earth is three thousand, nine hundred and fifty-nine miles. I remember thinking how disappointingly small this was and how anxious I became at the idea of billions of minuscule people and animals and cities being stuck to this minute green and blue ball out in the middle of space. A few months later I threw a marble out to sea on Brancaster beach, proclaiming to my family that the marble in the sea was as proportionally irrelevant in terms of mass to the unknown mass of the ocean as the earth was to space. They had laughed and continued walking ahead, the wind tugging at their clothes as though trying to pull them into the water.

The sea was choppy that day. I remember this vividly, but I remember everything vividly. That’s the problem. It had swayed and dipped like crude oil, its surface veined with seaweed where thin dirty crests appeared and disappeared unevenly in the swell as though they weren’t quite sure which way they should be heading. I remember, too, grains of sand skimming across the hard plane of the beach, a sharp January wind that carried with it the decaying scents of the sea and the marshes to the east. On the hazy spine of Scolt Head avocets gather in their hundreds. To my left, like the iron finger of some long-fallen robot, I can just make out the top of the wreck poking through the water.

Back in the car, I stare directly at the sun. It’s high and bright, and I’m thinking someone, God perhaps, is trying to burn a hole through the universe with a magnifying glass when the scent of sulphur drifts eerily through me. I’ve half been expecting it. After a seizure of that size, there are often little aftershocks: partial seizures no one can see but me.

I hold out my fingers and study them in the strange fluorescent light. It feels like I’m in space.

Everything is both big and small at the same time. Everything is beautiful yet frightening. There is something quite beguiling about the aura, before it takes me, that is, something about the intensity of the light, its still prismatic sharpness before it shatters into millions of glittering particles. When I’m in the aura I get to see below the surface of everything. I get to see the wires that hold the universe together. Within it, I listen to the even hum of the Rover and I can’t help thinking about that marble, only I’m not thinking about it floating freely in the clear abyss of the ocean. I’m thinking about it covered in silt on the sea bed.

Uncle Pete clears his throat, like he’s testing a microphone. The resonant boom distorts in my head. He looks at me for a few seconds, dark eyebrows pinching over a flat nose, but whatever it was he was going to say, he doesn’t say it. Instead, he looks back to the road flowing smoothly beneath us. He screws up his forehead as he thinks, concentrating on his driving even though there are no other cars about. It’s just an empty straight line pointing forward, its neat edges trying to join up somewhere in the distance. I could even drive on a road like this.

I like Uncle Pete. He doesn’t talk to me like I’m an exchange student. He doesn’t shadow me as everyone else seems to do. He and Aunty Anne own a white-bricked cottage on the North Norfolk coast where Charlotte and I spent part of our holidays when Mum and Dad were both working. There’s a long sandy nature reserve there. For most of the year you can spot curlews, godwits and lapwings, and in the winter, when the sky feels as cold as the sea, there are geese, twite and redstarts.

‘She didn’t want to come here in the first place,’ I say in a monotone voice that doesn’t really sound like my own.

‘No,’ he says. ‘But that’s no reason for her to put your mum and dad through all this, is it?’ He’s trying to sound angry, but I know he isn’t, and as though to compensate, he runs his right hand awkwardly through his hair.

‘Do they still think that’s what happened?’ I say. ‘Do they think she’s run away?’

Ahead, a tractor and trailer pull out of a farm track. Uncle Pete tilts his head to the right as he indicates, overtakes, then gently straightens the Rover, the sun catching on the windscreen in thin ripples of white light. ‘We just can’t understand it,’ he says and he sucks in air and turns away and stares out of his driver’s window.

I, too, look away, pinching the bridge of my nose against a swell of nausea, and try to organise my thoughts, but it’s almost impossible. My mind is like an aviary. It has been since I came round that night, the smells of linoleum and disinfectant expanding relentlessly in the warm synthetic air. Mum is sitting forward on a wooden chair designed for sitting back on, that hurried look of hers accentuated in the artificial light.

I'm really looking forward to diving in to this book as several bloggers that I know well and have a similar taste with have already thoroughly enjoyed it. Hopefully I'll love it just as much as they did and watch out for my review which will hopefully be coming sooner rather than later.

Dominic Brownlow lives near Peterborough with his two children. He lived in London and worked in the music industry as a manager before setting up his own independent label. He now enjoys life in the Fens and has an office that looks out over water. The Naseby Horses is his first novel. It was long listed for the Bath Novel Award 2016.

You can find out more about Dominic, his book and connect with him using the links below: 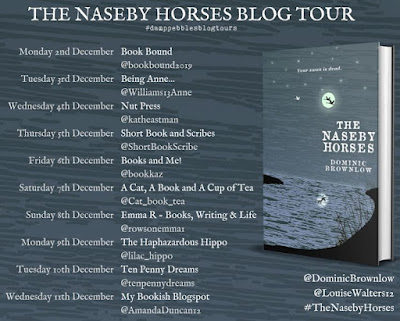 With kind thanks to Emma Welton at damppebblesblogtours for my stop on the tour and Louise Walters for my review copy. 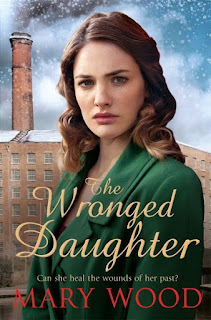 The Wronged Daughter in the third book in The Girls Who Went To War series and it's a belter!

Mags met Flora and Ella when they were nurses in Belgium at the start of the First World War. All three girls have a story to tell following the end of the war and The Wronged Daughter is Mags'.

Mags is imminently due to marry Flora's brother Harold but due to past experiences and others words of warning, she is having second thoughts. She desperately loves him but she fears that she will lose her independence if she goes ahead with the wedding.

Sadly for Mags a tragedy occurs which means that her wedding is postponed which only deepens her doubts about Harold. Will her life go as she's planned if she ties the knot to this potentially untrustworthy man?

Whenever I pick up a book by Mary Wood I always try and mentally prepare myself for the rollercoaster journey that's sure to follow but Mary get's me every time and once again right from the first few chapters I was in pieces. I had nothing but sympathy for Mags and I read on in horror as I watched her life descend into chaos. Harold was a cad and I came to dread seeing his name on the page. It's not often that I genuinely dislike a character, I can usually find at least one forgiving feature or come to the conclusion that there is a reason for their deplorable behaviour, but with Harold, there was nothing, he was just a despicable excuse for a human being.

I was so pleased that Mags had a wonderful support network of strong, female friends that she could rely on as goodness knows she needed them. It was really uplifting to watch the friendships develop and I felt like it was a privilege to be privy to their struggles and I wanted to be able to help them through their troubles rather than just read about them.

Once again Mary Wood has written an enthralling tale that could very much be the story of many a woman at the time that the book is set. Thank goodness times have changed somewhat. I loved every single page of The Wronged Daughter and I was delighted to see that there is going to be a fourth book in this stunning saga series, following the children of the three girls.

I know that I've said it before, but I'm going to say it again, if you love historical fiction and/or saga's and you haven't read any books by Mary Wood (or Maggie Mason) then I urge you to add one (or more of her fabulous books) to your TBR, she is one hell of a storyteller and I'm confident that, like me, once you've read one book you'll be completely hooked. 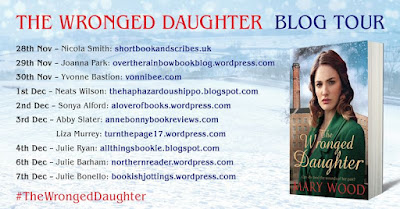 With kind thanks to Mary Wood and Ellis Keene at Pan Macmillan for my review copy.
Posted by Neats at 07:30 27 comments: