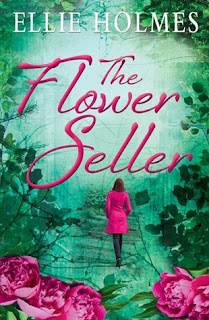 The Flower Seller is a wonderfully engaging novel about love, betrayal and hope.

Jessie Martin's husband William leaves her after twenty years of marriage for a much younger woman but despite being devastated she's determined to move on with her life.

Encouraged by her daughter Hannah, Jessie has put a lonely hearts advert in the Abbeyleigh Gazette and when we first meet her she's waiting nervously for Barry Sturridge, a farmer, two years her senior and secretly hoping that he doesn't turn up.

They chat about the usual getting to know you topics of work and hobbies. Jessie telling him about her separation, her daughter and her work as a conveyancing lawyer. It's obvious that Barry isn't the man for her so when he asks her to go to a motocross event with him that weekend she politely declines as the thought of standing in a muddy field is less than appealing to her. But when he invites her to be his plus one at his cousins wedding she remembers that Barry's father is the president of the Abbeyleigh and Stebbingsford Farmer's Club and is involved in the current purchase of a local farm so she accepts thinking that it could be a potential business opportunity for her to impress the partners.

Working in the same building as William is taxing. As a successful criminal lawyer he's used to the finer things in life and getting his own way so the fact that Jessie is refusing to give him a divorce as well as not wanting to sell their home is infuriating him. But Jessie wants to make him suffer, so she stands her ground.

After talking business with Barry's father at the wedding reception Jessie meets Owen Philips who runs a local flower stall and has provided the flowers for the happy couple's special day. Owen offers to give Jessie a lift home as the weather has taken a turn for the worst and Jessie finds herself opening up to him about her situation. It's like a weight has been lifted from her shoulders and she decides to finally take off her wedding ring and start her new life.

Owen is a big part of her new life and despite being younger than her Jessie is happier than she's been for a long time. Could Owen be her pearl diver? He certainly seems to be but William isn't happy, especially as his life is now becoming more difficult with his girlfriend Chelsea pregnant and wanting to get married.

As Jessie moves on with her life trying to become a salaried partner at work, William is still demanding the sale of their house and a divorce but is that truly what he wants? He thinks that if he can remove Owen from the picture Jessie will give in so he sets out to find out more about Owen in the hope of finding some skeletons in his closet, but will the perfect Owen have anything to hide?

I've been reading a lot of psychological thrillers lately, so to read The Flower Seller was a wonderful treat for me. I fell in love with the cover and the storyline was set at just the right pace to hold my interest.The characters became real people, not just words on a page and they could easily be someone you know. I wanted Jessie to be happy with someone who treated her with respect and I really wanted William to get his comeuppance for cheating. What shone through for me was the way that the author comprehends the vast array of emotional situations covered,  from the bitterness of a betrayed spouse, to the joy of starting out in a new relationship and all the worry and trepidation that goes with it. This was a delightful and captivating book and one that I would highly recommend.

You'd never guess that this is a debut novel as author Ellie Holmes' writing is very self-assured and I hope that she is busy writing her next novel.

You can find out more about Ellie Holmes and read some of her flash fiction here.

With kind thanks to author Ellie Holmes for the review copy.