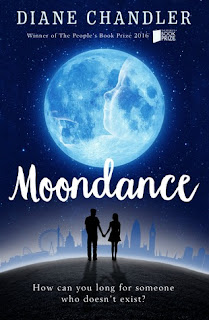 Moondance is the story of Cat and Dom, a successful couple who work hard and are used to having everything they want, when they want it, until they decide that they want a family.

Cat has planned to be pregnant at a particular time in her career that suits her but this is one thing that she doesn't have control over and when her carefully made plans go awry the couple decide to try IVF treatment.

What follows is a heart wrenching, emotional and captivating story of the couple's highs and lows as they desperately try to conceive.

Diane Chandler has drawn on her own experiences and written a no holds barred story of the trials and tribulations of the IVF process. I felt like I was eavesdropping on Cat and Dom's life and at times it was difficult to read. Cat, for me, initially wasn't a likable character but as I found out more about her background I could see why she was the way she was and found myself gradually warming to her and just wanting her to have the happy ending she craved for. There are so many emotions that are dealt with in this book, ranging from jealousy when Cat's best friend reveals that she's pregnant, frustration and grief when numerous attempts to conceive fail, the elation when the couple appear to have achieved what they thought for so long would be impossible. There are also a number of humorous incidents, one of my favourites was when Cat is so caught up in her own thoughts that she utters the word masturbate instead of MasterCard!

This is a truly stunning novel written with real empathy and honesty. I loved every page and I would highly recommend that you read it.

I'm delighted that author Diane Chandler has very kindly taken the time to write a guest piece for me which will give you a little insight into how Moondance came about.

It’s been so many years now since we went through our final IVF cycle. We managed seven in all, but it was the fourth which created our daughter – we never quite managed a sibling for her. I’m well aware that I’m one of the lucky ones, one of those who got there, and I guess I was able to shut the memories of those days down. Yet, when my daughter was small, I began to write a novel about IVF. It sat in the dark for years, but I returned to it in 2015 after my first novel was published and it will be published on 1st November.

Moondance draws heavily on my personal experience of the physical and emotional impact of IVF. There has always been so much non-fiction out there, but as a writer I thought it would be fascinating to produce a novel which pulls no punches on the tests and treatments involved. A novel which raises awareness. Perhaps a novel which, for those who’ve been through it, might even enable a feeling of being understood and having their experience put into words. Most people know someone who has gone through IVF, but how many really understand the emotional pain involved? The trauma of self-injecting? The nerves before the general anaesthetic kicks in? The grotesque two-week wait? Writing Moondance was incredibly cathartic. But still, it’s not my story.

Moondance is about a couple who meet when they are young and are very happy together. But Cat is flying high as a political lobbyist and is reluctant to try for a baby until she is ready. Unable then to conceive naturally, she and Dom embark on fertility treatment and both they and their relationship begin to unravel. In Cat, I chose a protagonist who is entitled, somewhat arrogant even, and hoped to create empathy for her despite this.  As an early review has said, “Cat is in control. Of everything. What better heroine to pit against the cruel and whimsical cycles of the moon.”

While Moondance is a novel about IVF, on another level, its themes are more universal, of love, of marriage, of sex, of family. I’m told that it is honest and authentic and emotionally raw - but there is also something to smile about along the way, even laugh-out-loud moments. And, of course, there is always hope. There has to be hope.


This year my daughter became a teenager. And yes, there are still many days when she walks into the room with a smile and I gaze at her in wonder.

Moondance will be published on 1st November and is available for pre-order now here. You can find out more about Diane Chandler by visiting her website.

With kind thanks to author Diane Chandler for writing a guest piece and to Blackbird Digital Books for the review copy.