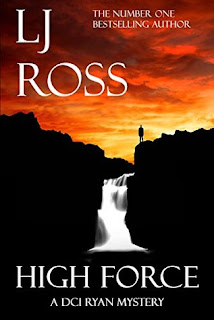 When I finished reading Angel back in September of last year I was left on tenterhooks by the author LJ Ross. That book ended with the mother of all cliffhangers so I was thrilled to be asked to read and review copy of High Force, book 5 in the outstanding DCI Ryan Mysteries series.

As High Force picks up where Angel finishes it's difficult to know where to start my review as you might not be up to speed with the series and I'd hate to ruin it for you, so I'll tread carefully.

DCI Ryan is back on the trail of his nemesis Keir Edwards, also known as The Hacker and once again it's personal. Edwards is on the run and he's more determined than ever to make Ryan pay for his part in putting him behind bars and clearly sees him as unfinished business, but he also loves the thrill of the chase so he's not going to make it to easy for Ryan and his team.

Desperate not only to find their missing colleague and Edwards himself, but also to find out who was behind the elaborate prison break, time is definitely against them and they are left wondering how long it be before they find a body.

I take my hat off to Louise for writing such a superb series, where each book surpasses the dizzying heights of the one before and High Force is no exception. I've read several crime series where it seems that the author has run out of fresh ideas or the endings become rushed, but that is definitely not the case here. I finish each book eager to know what's coming next for this brilliant cast of characters that I've come to know and love almost as if they're real people.

High Force is a book that will have you holding your breath on more than one occasion and you probably won't be aware that you're doing it until the danger has passed and you breathe a sigh of relief. Once again set in the North East (High Force is an actual waterfall on the River Tees, google it!) the descriptions of the stunning scenery really jump out from the page which just adds to the feeling of being right there in the thick of the action.

I absolutely loved this book and with each new book in the series I fall a little bit more in love with DCI Maxwell Finlay-Ryan (yes, I've experienced the 'Ryan Effect' Ms Ross!) and I'm not ashamed to admit it.


High Force is released on the 31st January and is available to pre-order here.

I'm delighted to welcome the very lovely LJ Ross to The Hippo today with a guest post.

My publishing journey really began in the summer of 2013, when I was heavily pregnant with my son (now aged 3). Having studied and worked as a city lawyer for years in London, I had taken the decision to change career, although I wasn’t entirely sure what that new career would entail. I considered re-training as a forensic psychologist and even completed a postgraduate diploma but it wasn’t until I was eight months’ pregnant during the summer heat wave that I really allowed myself to imagine becoming a writer (while sitting in front of an enormous desk fan).

Too competitive, too risky, too impractical. That was what I had always thought, even while ideas for stories would run through my head. And then, one day, I thought: what if?

In those stolen moments while my baby slept, I started ‘Holy Island’, which would eventually go on to become an international #1 bestseller. Once my son started attending nursery, I was able to make some real progress and I found that I loved my new work. I was insecure and nervous about how it would be received but with the encouragement of family and friends, I decided to send it to a few agents and publishers accepting direct submissions. I was shocked and delighted to receive positive feedback and a couple of offers, but then the practical side to my brain kicked in once again.

Would taking the so-called ‘traditional’ route suit me? Particularly when there were no guarantees of distribution and a requirement that I relinquish much of the control over my work? I felt uneasy with the prospect and it was my husband who suggested that I think outside of the box and consider using the Amazon Kindle Direct Publishing platform instead. I decided to take the plunge and after releasing my first novel on 1st January 2015, it reached #1 in the UK Amazon Kindle chart in May of the same year. Less than two years later, I have released three other novels, all of which have been #1 bestsellers, alongside audiobooks and a German edition and have never regretted my decision to publish independently.

It takes hard work and a willingness to manage the ‘business’ side to the industry, but this never overshadows the pure joy I have found in writing stories and finding that there are people out there who enjoy reading them.

Thank you for taking the time to write such an interesting post and for stopping by today Louise. It must have been a tough decision to make, venturing into the unknown and I'm so pleased that all of your hard work is paying off.

If you want to find out more about LJ Ross' books or connect with her you can use the links below: