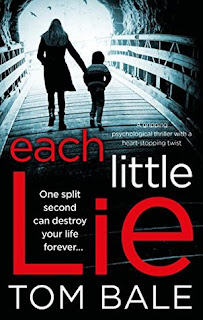 I'm thrilled to be one of today's stops on the blog tour for Tom Bale's latest book, Each Little Lie.

Once again Tom has written a book about an ordinary person who finds themselves in a dilemma no-one would want to find themselves in. In Each Little Lie we meet Jen, a single mum to Charlie who is going through an acrimonious divorce from her husband, Freddie.

On her way to work one day she notices her neighbour drop his keys, trying to do the right thing she picks them up but she's unable to get his attention as he drives off with a friend. Not wanting to leave the keys where someone could potentially find them and not having a pen to leave a note, she decides to enter the house.

After having left a note stuck to the neighbours front door she heads off to work without giving much more thought to the matter. Later that evening there's a knock on Jen's front door, but instead of the neighbour in search of his keys, it's the police who proceed to arrest her for criminal damage and burglary.

Jen is shocked to say the least but the consequences of her going to prison are too high so she sets off to clear her name which triggers a whole chain of events which quickly spiral out of control. Is her theory that someone is out to get her all in her mind? If not, then who is it and why have they targeted her?

Having read some of Tom's previous books I was expecting a fast paced, action  packed thriller but Each Little Lie is a slower, more hesitant story, which relies more on building the suspense. That said, I still found myself racing through it, keen to find out who was targeting Jen. Yes, some of her actions were questionable, but people do strange things in the heat of the moment. What made this such an enjoyable read for me was the fact that there were quite a few characters who fell under suspicion and each one appeared to have a plausible reason for being the main suspect until, a few pages along, another revelation was made which caused me to doubt my reasoning. There are some pretty horrible, self-centred, manipulative and downright vile characters in this book but that just added to the realism and when the story is based on deceit, lies and corruption there's bound to be more than a few unsavoury characters.

For me Each Little Lie was a slow burning read that pulled me in and had me gripped right up to the climactic end and one that I would definitely recommend.


You can follow the rest of the blog tour on these great blogs: 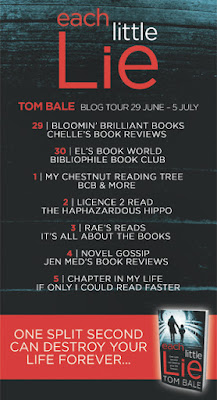 With kind thanks to Kim Nash at Bookouture and NetGalley for the review copy.