#Blog Tour - Behind Her Back - Jane Lythell 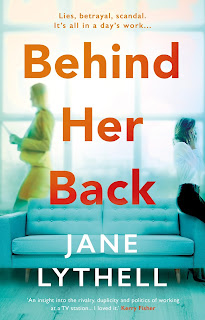 I can't tell you how thrilled I am to be today's stop on the blog tour for Behind Her Back, the brilliant new book by Jane Lythell. Not only am I sharing my thoughts on the book, Jane will be stopping by for a chat as well.

I read Woman of the Hour, the first book in the StoryWorld series, earlier this year (you can read my review here) so I was really looking forward to reacquainting myself with these characters again. Don't worry if you haven't read the first book as this can easily be read as a standalone but take it from me it's definitely worth adding it to your TBR and it's currently available to download for just 99p!

Liz has just returned to StoryWorld after a well deserved holiday with her daughter Flo, only to find a new face in the office in the shape of Lori Kerwell. Lori has been brought in for sales and marketing but it's clear that she's out to cause as many problems as she can for Liz.

Liz has enough on her plate dealing with Fizzy coming back after her maternity leave, Ledley, who has been filling in for Fizzy, the ever-changing moods of her teenage daughter and trying to pin down the elusive rogue builder, Ron Osborne, who has taken money from her without fixing her patio doors, so she really doesn't need Lori and her PowerPoint presentations stirring up trouble and trying to undermine her at every turn.

Add into this mix a hair dye meltdown, a potential new man, ego's that need stroking, back-stabbing, lies and secrets (and that's just the tip of the iceberg) I'm sure you can see why I found it hard to put down.

I loved this book because it gives such a rare insight into the world of television. So many of us watch this type of programme but very few of us would ever get to find out what goes on behind the scenes and this is what makes Behind Her Back such compelling reading. Jane worked in this environment for many years and her experience shines through in her writing. Every character is so believable that as a reader I really got behind them, either hoping things would go their way or keeping my fingers crossed that they would get their comeuppance.
This is a fast paced novel, full of drama and tension with some fascinating subplots cleverly woven throughout, which gives a greater insight into the minds of the characters involved. Jane Lythell is a wonderfully perceptive writer and it's a refreshing change to read a novel where the female protagonist is predominantly based in the workplace having to strike the delicate work/home balance that so many women deal with in today's society.

StoryWorld isn't a place that I'd ever want to work but it is somewhere that I'd highly recommend you visit by reading this excellent book!


As promised at the beginning of this post Jane took some time out of her busy schedule to answer some questions and I'm delighted to welcome her back to The Hippo today.

Can you start by telling us a little about yourself and your background?
I grew up in beautiful Norfolk, went to university in London and stayed on. I worked as a television producer for 15 years. I then moved to the British Film Institute as Deputy Director and did one year as Chief Executive of BAFTA which was miserable! I started writing full time in May 2011 and my debut novel, The Lie Of You, was published by Head of Zeus in January 2014. I live in Brighton now, love being by the sea but still get up to London to watch my beloved Tottenham Hotspur.

What was it that made you decide to leave the world of television to take up writing full-time?
Television is a seductive industry. You feel you are at the centre of things because you hear of news and events before most people and it is difficult to give this up. But, and this is what happened to me, it can be a burn-out industry. You are expected to work until the show is ready. The hours are never predictable and this made it difficult for me as a lone parent. I left my career in television when my daughter Amelia was nine. It took me a few more years to get down to writing, something I had always wanted to do.

How would you describe Behind Her Back to entice someone to read it?
I’d say that it has a heroine facing work and home conflicts many of us can relate to. Behind Her Back is about backstabbing colleagues at work. A new Head of Sales arrives at the TV station and she joins forces with the News Editor, who hates Liz, to undermine her at every turn. Meanwhile at home Liz has started to date again but her fifteen year old daughter deeply resents the new man in her life. So there is a lot of conflict which drives the story.
How much of your main character, Liz Lyon, is based on your own experiences?
A lot because I worked as a researcher and then a producer and I was also a lone parent. I’ve experienced the feelings of guilt about not spending enough time with my daughter as well as the self-doubt and the stress of competing pressures which make up Liz’s life.
In all my novels I deal with stuff that has happened in my life but it is transformed when it is told through fictional characters and situations.

Having worked in the industry did you ever find yourself in similar situations to Liz?
Oh yes. I worked on a three hour live show called Good Morning Britain. One morning a guest refused to come out of make-up as her hair looked a fright. I’ve also had to deal with difficult and drunk guests. I drew on these memories.

Liz and Flo both have a love of food and you included three recipes in the back of Woman of the Hour. Do you share their passion for food?
I do, especially anything with melted cheese as part of the recipe! Like Liz I am an average cook but I enjoy it. When Liz gets home she often cooks to help her decompress from the stresses of work. I think many of us find comfort in cooking after a particularly bad day at home or the office. 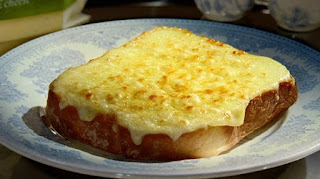 Are any of your characters based 100% on people that you worked or dealt with when you were in the industry?
No, though some have been inspired by people I met in my career. For example Fizzy Wentworth, the star of StoryWorld TV, has been drawn from a number of on-screen presenters I observed in my years in TV. There is something about being in the limelight every day that affects people. They do become self-absorbed with a tendency to dramatise like Fizzy.

If you had to work at StoryWorld what role or department would you work in and why?
Definitely in Features rather than in News as I’m interested in lifestyle stories: food, fashion, health, books and social affairs. At TV-am, where I worked for six years, there was a great divide between the News and the Features teams, almost a feud!

Woman of the Hour and Behind Her Back are both set predominantly in the workplace which is quite uncommon. Why do you think there aren’t more authors setting their books in this environment?
I don’t understand why there aren’t more books dealing with women’s working lives. The drama of the workplace offers such a rich seam to mine. So many issues and moral dilemmas are thrown up by this aspect of our lives. There are power struggles, intrigue and betrayals as well as moments of camaraderie and satisfaction at a job well done.

Ernest Hemmingway, Lewis Carroll and Charles Dickens all famously did their writing standing up and this is how I believe you do your writing. How and why does this technique work for you?
I started doing this three years ago, actually on the advice of my osteopath, because my back was aching from leaning over my laptop. I rigged up a tray on legs on top of my desk but that still wasn’t high enough. Several fat reference books were then added to the pile. (PIC attached).  Well straight away my back felt better and I was also more alert. Now I cannot imagine working any other way.

What book do you wish you had written and why?
I wish I could have written The Shipping News by Annie Proulx. It has everything I love in a book: a despised and hapless hero in Quoyle; a wonderful sense of place in her depiction of Newfoundland, the land of Quoyle’s forefathers and a journey of redemption for Quoyle. I do not like hopeless books. I like there to be some light at the end.

Is there anything else that you’d like to say to the readers?
I’d like to thank warmly the readers who review my books as reviews are pure gold to us writers. I’d also like to say three cheers for book bloggers, like the magnificent Hippo, who do so much to support writers.

Thank you so much for taking the time to answer my questions Jane and best of luck with Behind Her Back.

You can find out more about Jane, her books and connect with her using the links below: 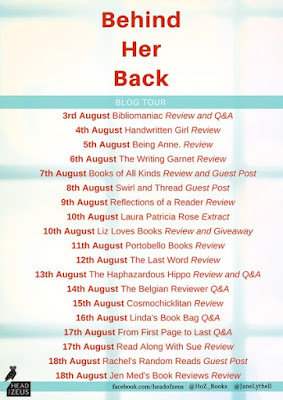 With kind thanks to Clare Gordon, Head of Zeus and author Jane Lythell for the review copy.