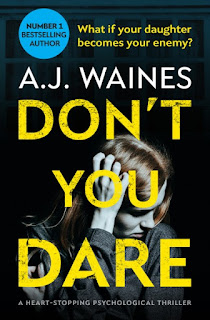 A.J. Waines is one of my go-to authors so I was thrilled to be offered the opportunity to read Don't You Dare and take part in the blog blitz.


What if your daughter becomes your enemy?

When barmaid, Rachel, discovers her soon-to-be-married daughter, Beth, pinned down by a stranger in the pub cellar, Rachel lashes out in panic and the intruder ends up dead. In desperation, Rachel convinces Beth they should cover up the crime and go ahead with the planned wedding in one month’s time.

Rachel, however, has her own reasons for not involving the police.

Hiding their dreadful secret is harder than they both imagined and as the big day approaches and the lies multiply, Beth becomes a liability. Rachel looks on in dismay at the hen party when, after too many drinks, Beth declares she’s about to make a special announcement. But before Beth can say a word, she disappears...

When two people share a chilling secret, can both hold their nerve?

This book explores the dark side of a mother-daughter relationship when pushed to the limit.

I love the way that A.J. Waines always manages to hook me into her books right from the outset and Don't You Dare is no exception. Told in alternating chapters by Rachel and Beth and it was fascinating to see how the mother/daughter relationship evolved following the accidental murder. It's clear that Rachel was only trying to protect her daughter but it soon becomes obvious that both women are keeping secrets from each other. Rachel has her reasons for not wanting to involve the police but Beth has no idea why and she is desperate to talk to someone about what's happened but instead she shuts herself away but that only makes the situation worse as her friends start to become suspicious. Surely a bride to be would be busy making sure things were perfect for her upcoming big day - not shutting herself off from everyone.

Don't You Dare is a gripping tale of secrets, lies and deception and reading it was like being shut in a pressure cooker - I could feel the tension building up all around me and I couldn't wait to reach the end so that I knew how this tangled web of lies was going to be concluded. A.J. Waines has once again written a fabulous psychological thriller that is worthy of a place on every fan of this genre's bookshelf or kindle.