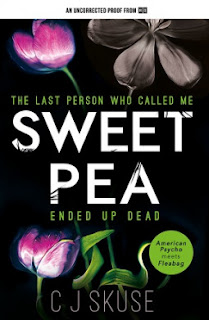 This is one of those books that will divide readers, you'll either love it or loathe it.

Sweetpea is an unconventional take on a serial killer. Rhiannon is your average girl who loves her boyfriend, her dog and her Sylvanian family collection but there's a darker more chilling side to her and boy has she got issues!

Told in diary form, each entry begins with a list of people who have annoyed her the day before and have therefore made it to her 'kill list'. Rhiannon's lists cover the full spectrum of people from drunk guys hitting on her via work colleagues taking credit for her work and finishing with the check out assistant who squeezes her bread just a little bit too much. We've all been irritated by people like this but I'm sure none of us have gone so far as to create our very own kill list.

When Rhiannon was a child she had a traumatic experience which briefly brought her fame but now she's just your average girl next door (at least on the outside) hating her job, her work colleagues, especially Lana who is sleeping with her boyfriend, but trying to appear 'normal' and fit in with everyone else. Every day is a struggle but unlike ordinary people who would cheer themselves up with a spot of retail therapy, a new top, lipstick or book, Rhiannon chooses murder!

OK so let's get down to the nitty gritty part where I share my thoughts. This is where it gets difficult.

Rhiannon as a character was fantastic and being able to get inside her head was an experience I won't forget in a hurry. I loved her dark humour and cutting comments especially when she was out with her PICSO's (people I can't shake off) We all know them, people who incessantly talk about their lives, house, children and spouses to the point where you're pushed to your absolute limit. The banal conversations that Rhiannon valiantly tries to contribute to in her continual effort to portray her normality but knowing that these people are not interested in anything other than themselves. She's not totally devoid of feelings though and her little dog Tink is the one thing she truly loves other than that everything is clearly black or white to her. Being an innocent bystander as you watch her life spiralling out of control is difficult to read at times but one that's fascinating at the same time.

I liked Sweetpea, but sadly as much as I want to be able to tell you that I loved it, I didn't. Maybe it was just bad timing on my part and I wasn't in the right frame of mind for a character who is clearly certifiably nuts or maybe it was the fact that the story just didn't grip me or flow as much as I was expecting it to. It felt too long in parts and not long enough in others. It was almost as if the author had so many ideas she wanted to work into the story but wasn't prepared to leave any of them out. This is a book that had so much potential but for me ended up being a mishmash of different genre's that didn't gel 100%. That said, after the cliff-hanger ending, I'm more than a little curious to find out what happens to Rhiannon.

With kind thanks to NetGalley and publishers HQ for the review copy.