The Abattoir of Dreams - Mark Tilbury 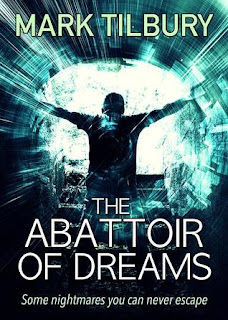 I'm not usually at a loss for words when it comes to reviews but this book has left me speechless. . . in a good way!

Being a book blogger means that you find out about lots of books before they're published and some books create a real buzz in our community and The Abattoir of Dreams was one of them. Several bloggers that I know and trust were screaming from the rooftops about it so I bought my copy with the plan that I'd sneak it into my schedule at some point, but then I lost my reading mojo. That's when I decided to give this book a go and I certainly got my mojo back!!

We first meet Michael Tate when he wakes up in hospital with no recollection of how he got there. He then finds out that he's been in a coma and that he's paralysed from the waist down, surely things can't get any worse for him. . . . . enter Detective Carver to accuse him of murder!

Michael has amnesia so he has no idea if Carver is telling the truth or not but his constant replies of "I can't remember" only seem to be provoking the detective who clearly just wants him to admit that he murdered his girlfriend Becky and he has some very unconventional and probably illegal ways of trying to get Michael to confess.

Then Michael starts to have dreams that take him back to his childhood which is a very dark place that's full of experiences no child should have to go through. But are these dreams real? Is his memory returning or is it the effects of the drugs he's taking?

I wasn't prepared for the extreme roller coaster of emotions that I was taken on while reading this. One minute my heart was bleeding for Michael and the next minute I was filled with horror at the level of abuse that some of the characters were subjected to. Every single character will evoke an emotion for one reason or another and that includes Oxo, Michael's dog. As much as I loved Michael and was willing his life to turn around, at the other end of the spectrum I was filled with a disturbingly vicious hatred for Detective Carver. I've met some truly despicable characters in books before but never in my life have I encountered one as truly repugnant as this one! He made my skin crawl and even thinking about him now while writing this turns my stomach.

The Abattoir of Dreams is a book that won't sit comfortably with some readers due to the subject matter but if you can get past that it's one that will leave you gasping for breath. Mark Tilbury has taken on a very dark and almost taboo subject and deftly created a story that deals with these issues sensitively and with compassion and the end result is a book that I honestly can't recommend highly enough.