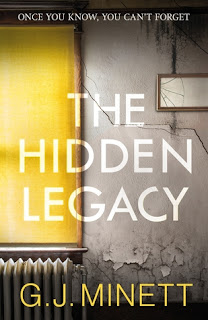 The Hidden Legacy is an excellent debut novel by Graham Minett and one that I wish I'd found about sooner.

John Michael Adams is just a young boy at secondary school in the 60's when he commits a heinous crime in the school playground. During the trial the media took to calling him "Every Parents Nightmare" and it became one of those stories that no-one ever really forgets, and which the press resurrect at every given opportunity.

Fast forward to 2008 and we meet Ellen Sutherland, recently divorced with two children and busy trying to find the right work/life balance. When she receives a letter from a solicitor asking her to get in touch, she almost dismisses it but then curiosity gets the better of her. The result is she has inherited a chocolate-box cottage in The Cotswolds. Primrose Cottage belonged to Eudora Nash and Ellen has never heard of her, so why would she leave her this beautiful cottage? With her mother having dementia and not knowing the identity of her father, Ellen decides to do some research to try and find out more about her mystery benefactor.

It's not long before Ellen realises that someone else is also interested in Eudora's history but how is this all connected to her?

You're probably thinking that this is a story that sounds familiar, person X receives a letter telling them about an inheritance etc, etc, but take it from me, you'll be hard pushed to find one that's as well written, gripping and full of twists and turns as The Hidden Legacy.

The prologue is one of those that has you literally holding your breath and it's easy to see how Minett won the Chapter One competition in 2010, with what would eventually become this exceptionally written debut novel. The writing is intelligent and beautifully descriptive in parts and the story is a complex one but the execution is flawless resulting in a fluid transition between the past and present.

Examining how society feels and treats child killers, even years after the event and justice has been served is a brave subject to tackle and the way that the book is constructed makes for compelling reading. As much as I was eager to find out exactly how Eudora was connected to Ellen I also wanted/needed to know more John Michael Adams to find out what had pushed him to the place that would cause him to perform his hideous act.

I absolutely loved this book and would recommend it to anyone who enjoys thrillers, mysteries, crime. . . . . .  actually just to anyone who reads! It's a fantastic book and it deserves to get more recognition, along with the author himself. That said, I know that G.J. Minett has a new book called Anything For Her coming out in November and you can find out more about that when I hand over to Graham here on The Hippo on November 25th. Until then if you're looking for something to read then I urge you to give The Hidden Legacy a try, I'm sure you'll love it! 😉