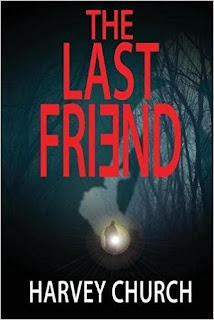 I'm thrilled to be today's stop on the blog tour for The Last Friend by Harvey Church.

Donovan's daughter, Elizabeth went missing from a fairground 15 years ago, so imagine how stunned he is when a young woman called Monica knocks on his door, totally out of the blue, claiming to have been Elizabeth's last friend.

Monica tells him how she was held captive with Elizabeth, she knows who abducted her, where her remains are, as well as details about her childhood, things that only Elizabeth would know. . . .  but is Monica telling the truth?

After more recent events, Donovan is a vulnerable and desperate man who really wants to believe that Monica has the answers to all is questions but does she have an ulterior motive?

I'm never sure what to expect when I read a new author but I'm pleased to say that Harvey Church didn't disappoint!

The Last Friend is a dark and disturbing tale of the lengths a father will go to to discover what happened to his daughter, regardless of how traumatic the outcome may be. My heart went out to Donovan and I really felt for him. I was instantly suspicious of Monica and that suspicion only grew as the story went on. I didn't want Donovan to be taken advantage of when he'd been through so much already and I feared how he would react if he finally got the answers to his long awaited questions. At the same time I was also thinking but what if Monica is telling the truth, she's been to hell and back.

I thoroughly enjoyed reading this book. The short, sharp chapters were a great way of adding to the tension as I quickly turned the pages to find out what was going to happen next. Harvey Church has written a compelling story about a sadly, all too regular occurrence in today's world  and dealt with it with subtlety and sensitivity. If you're looking for something that will grip you right from the outset and different from most missing child stories then I recommend you give this little beauty a try. I'd definitely recommend it and I'm looking forward to reading more books by this author!


Harvey Church has a background in finance, which is how he found himself writing about the people and ridiculousness (sometimes the same thing) of that field in his Edwin Burrows light mystery series. Although he considers himself retired from that field (aka not working), he's planning another three Edwin Burrows novels for 2018.

His first "serious" novel, The Last Friend, is a Kindle Scout writing competition winner and was published by Kindle Press on January 9, 2018. The BookLife Prize called it "an entertaining read for mystery and thriller fans alike," and said it is "an unexpected and exciting series of events that will grab readers." Harvey plans two sister novels to The Last Friend in 2018, one titled The Last Night (Spring 2018) and the other tentatively titled The Last Survivor.

For fun, Harvey likes to practice street magic and spends hours engineering tricks to wow his audiences. He is also an avid hockey fan (Go Leafs Go). He has a wife and two kids. His favorite color is blue, but he drives a black car because he read somewhere, back in the 90’s, that radar detectors have a tough time seeing them. Interestingly, he never speeds because he's too busy singing like nobody's watching, or maybe it's that everybody is deaf.

He's a supporter of double-chins, double-dates, and double-dipping (though never on double-dates), and obviously enjoys writing about himself in the third person, in the voice of the narrator from The Royal Tenenbaums.


You can also find him wandering the streets of Chicago, Toronto, Montreal or the Lido deck of a Princess Cruise ship. If you ever meet Harv, ask to see a magic trick!

Make sure you follow the rest of the blog tour with these fantastic blogs. 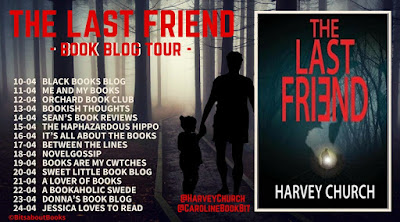 With kind thanks to Caroline at Bits About Books and author Harvey Church.