Those We Left Behind - Stuart Neville 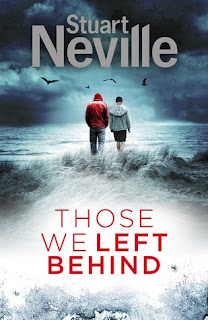 Those We Left Behind is the compelling story of two brothers who tragically lost both their parents at a young age, got bounced around the care system and then were convicted of the murder of their foster father.

Ciaran Devine was just 12 years old when he made his confession and he's now being released back into the community after seven years and anxious to meet up with his older brother, Thomas, who was released two years earlier.

DCI Serena Flanagan was involved in the original investigation and always harboured doubts that Ciaran was the killer, believing that Thomas was responsible but despite getting close to Ciaran it was never enough to get him to change his statement.

Once the two brothers meet up again it becomes clear that Ciaran, despite being almost twenty, is still immature and completely under Thomas' control, looking to him for everything and unable to do things for himself.

Ciaran's probation officer Paula Cunningham also believes there was more to the original case and reaches out to Flanagan for help.

The story that follows is cleverly told by interspersing flashbacks to the developing relationship between Ciaran and Flanagan before he was sentenced, the consequences suffered by the son of the man he killed and a glimpse into Flanagan's struggle to balance her return back to work after cancer treatment with her family life.

This is the first novel I've read by Stuart Neville but it won't be the last. Neville's ability to intertwine all the threads of what is overall a complex and disturbing story is second to none. The characters are well formed and you can feel for all of them at some point during the novel. I especially liked Serena Flanagan who was a truly believable protagonist and I'm already looking forward to the next book in the series.

My thanks to NetGalley and Random House UK, Vintage Publishing for my review copy.