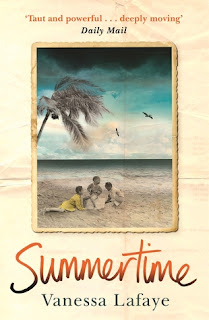 Summertime is the story of a group of former American soldiers set in the small town of Heron Keys, Florida in the 1930's and based on actual events, although the names, places etc have been changed.

I was lucky enough to win a copy of this book via Goodreads and their First Reads giveaways and when it came through my letterbox I couldn't wait to read it.

The historical note at the beginning of the book was a nice touch as it explains the background  to the story, how racial tensions were running high during this time, how the First World War veterans had ended up in this small town after being denied bonus payments from the Government and how this was a fictionalised account of actual events.


The opening chapter introduces us to Missy, who is a nanny for the Kincaid's, bathing their baby Nathan outside under the shade of a tree in the oppressive heat. When she pops into the house to get some ice, leaving Nathan unsupervised, she's hears the Kincaid's dog barking furiously and assumes that another wild eyed man had entered the garden in search of food. How wrong she was. The sight that greets her on her return to the garden is the stuff of nightmares, as camouflaged by the mangroves is a crocodile with his large snout grasping the end of the basket containing baby Nathan.

The book then goes into the build up to the annual Fourth of July celebrations but a fight breaks out and a white woman is brutally beaten and fingers automatically point to the coloureds. All the time this is happening the storm is quietly brewing in the background and we find out about the locals and the veterans.

The story very cleverly manages to sit across several genres ranging from romance, history, crime and thriller, so there's a little bit of something for everyone.

I found that I wanted the hurricane to hit so that I could find out the fate of each of the characters and the build up to this is superbly written and you can feel the tension through each word you read.

Although I ended up enjoying this book, there were times at the beginning where things were moving a little too slowly for me and I found myself questioning who was who. Overall though it was a good read and thanks to the author's note and further reading at the end I went off in search of finding out about this little known event.