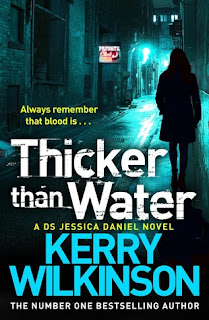 Thicker Than Water is the sixth book in the Jessica Daniels series.
Oliver, a teenage boy goes missing from a house he's supposed to be babysitting at but when the baby's parent's return home, nothing else is amiss and their daughter is still safely asleep in her cot.

DS Jessica Daniels is called in and although she's suspicious of the disappearance as Oliver's mobile was found at the house, she has nothing else to go on. But when a journalist friend informs her that someone placed an obituary for the missing teen two days before his disappearance her suspicions are raised even higher.When Oliver's body is then found in a seemingly random house across the other side of town the investigation takes a whole new turn.

This is another great read from Kerry Wilkinson and I really enjoyed the development of Jessica's character which is just as much a part of the story as the crime investigation. I would recommend you read this book but I think that even though it could be read as a standalone it would be much more enjoyable if you've read the previous five novels.