What Lies Within - James Morris 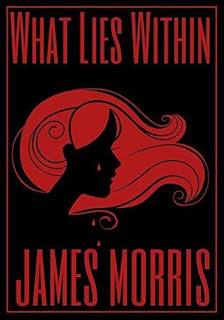 What Lies Within is a YA thriller that certainly pulls you in from the prologue. A young man is driving around the streets of Chicago looking for trouble, driving into rubbish bins, smashing into car wing mirrors and generally being a nuisance. When he pulls into a petrol station to fill up he gets the feeling that he's being stared at and when he turns he sees a motorcyclist looking like a "well armoured samurai". Now that he's made to feel less confident he decides against making any smart comments and just to fill up and get out as quickly as possible,so imagine his surprise when the next thing he knows is that he's being sprayed with a torrent of gasoline quickly followed by the click click of a lighter which is then casually tossed towards him. Remember this is just the prologue.

We then meet Shelley Marano who is just a normal teenager who helps out at her father's car bodyshop, that is until the day she receives a text message telling her that she's going to die and her whole world begins to unravel. What follows is a fast paced story full of twists and turns and self discovery.

I haven't read anything by James Morris before so I was a little apprehensive when I agreed to read this novel (I always am with author's I don't know) but I can honestly say it was a pleasure to read. After the explosive (literally) prologue which fits nicely into the story later on, I was taken on Shelley's journey as if I was right there. Although I didn't always agree with her reactions to certain situations (but then I'm not a teenager and I'm sure we're all guilty of making bad choices in our youth) the story was still very believable and she didn't annoy me like other YA characters have done in the past. I loved Winston's character, he was a real sweetheart who was well and truly stuck in the friend zone but to me he couldn't have been anywhere else. Shelley's dad was another great character, and one that I felt real empathy for. He's doing his best to bring up his daughter single-handedly but are some of his decisions the right ones? The only real criticism, and it's a tiny one, is that I would have liked to have seen a little more interaction between Shelley and her father.
All in all this is a great read and one that I think shouldn't limit itself to the young teen readers as I enjoyed every page and really hope that one day there will be a sequel.

With kind thanks to author James Morris for the review copy.