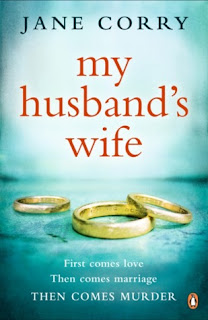 My Husband's Wife is a tense, psychological thriller told in two halves.

Lily and Ed are a married couple with secrets. Lily is committed to her job as a lawyer but Ed isn't happy with the long hours that she works, while Lily is jealous of Ed's ex-girlfriend and suspects him of having an affair. Not a great start for a newly married couple just back from their honeymoon in Italy.

While they are adjusting to married life, their neighbour, Francesca is struggling to bring up her young daughter, Carla. Life as a single parent, holding down a job and taking care of Carla isn't easy for Francesca but she has Larry to lean on for support. Carla struggles to fit in at school and doesn't always like Larry but after an incident at school one day she befriends Lily and she soon becomes a weekly visitor to Ed and Lily's home while her mother works.

When Lily takes on a high profile case defending Joe Thomas, a convicted murderer, she finds herself getting emotionally involved as Joe reminds her of her brother Daniel. While Lily is concentrating on her case, Ed is spending more time with Carla who has become the muse for his aspirations to become an artist.

The second half of the book picks up their story some years later and Lily is now a successful partner at the law firm, still married to Ed and they have a son. Carla, now a young woman, is returning to London after living in Italy with her mother and grandparents and she is studying to be a lawyer. She's heard that Ed sold his portrait of her, aptly titled "The Italian Girl", for a large sum of money and she feels that she's entitled to a share of it. She also wants to find Larry to pass on a message from her mother.

When Carla finally tracks down Lily and Ed it's the start of a cataclysmic chain of events that will change all of their lives.

This is a real slow burner of a book but it has to be that way so that you can get under the skin of each character and understand them. The story is told by both Lily and Carla in alternating chapters and, like any good psychological thriller, the end of each chapter will leave you in suspense of what is coming next. Every character is flawed and sometimes their motives are questionable but that makes them appear real. Full of twists, turns and red herrings this is a book full of  multi-layered characters whose lives become intricately linked forever and perfect for fans of darker thrillers like me. Jane Corry has written an impressive debut novel and I'm looking forward to reading more from her.

My Husband's Wife is available on kindle from the 26th May and you can pre-order it here.

With kind thanks to publishers Penguin and NetGalley for the review copy.