See How They Run - Tom Bale 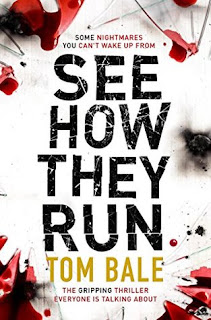 Imagine waking up in the small hours of the morning and finding masked intruders in your bedroom. That's exactly what happens to Alice and Harry French in See How They Run.

These aren't opportunistic burglars, these men know exactly what they're looking for, but Alice and Harry have no idea about either a package or a man named Renshaw. Before the men leave they threaten the young couple and their eight week old baby, warning them not to contact the police or they will come back and carry out their threats.

This is just the beginning of the nightmarish journey the couple have unwittingly begun. Harry is followed by Ruth who wants to know what happened with the intruders the night before but is insistent that she isn't a part of it, while Alice thinks she knows where to find the mysterious Mr Renshaw. The couple become separated, not knowing who to trust and desperate to know that the other one is safe.

The tension in this book was palpable and I had to remind myself to breathe on several occasions! Tom Bale does a fantastic job of combining the two complex storylines so that they are both relentless in pace without compromising on either story and with characters that are entirely credible. There are a couple of things I should warn you about though, don't start reading this book just before you go to bed as you're sure to have nightmares and don't pick it up when you only have a limited time for reading as this book is guaranteed to make you lose track of time.

This is a book that the term "page-turner" is all about, and in my opinion a must read book for all fans of crime novels. Now if you'll excuse me, I have a Tom Bale back catalogue to check out.