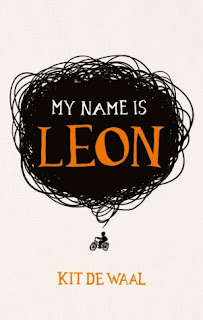 My Name Is Leon is the heart-rending story of nine-year-old Leon who hasn't had the best start in life.

It's London in the 1980's and Leon's mum Carol has just given birth to Jake but it's not a happy time for the single parent of the two boys. Carol soon becomes detached from everything and Leon takes on the responsibilities of looking after his baby brother and his mum.

Unsurprisingly it's not long before social services are alerted to the situation and Leon and Jake are placed in foster care with a lady called Maureen. Then social services make the decision that Jake would be suitable for adoption but Leon finds the whole situation hard to comprehend and just wants his little family back together.

Over the next few months life is very unsettled for Leon, he briefly sees his mother and Maureen is taken to hospital but he is able to find some solace when he makes a new friend and starts learning about gardening at the allotments.

Told from the perspective of a nine-year-old boy, Kit de Waal has done a great job of getting inside a child's head in this thought provoking novel. Tackling issues such as race, adoption and mental illness to name but a few, each one is sensitively and skillfully undertaken making what could have been a depressing story into a heartwarming and uplifting one instead. There were a few times when I had a lump in my throat and wished that I could reach into the book and give Leon a big hug when things were tough for him. His character is written in such a beautiful way that you can't help but feel sympathy for him, being a victim of circumstances beyond his control. Out of all the other characters I loved Maureen who just wants the best for these two brothers but being an experienced foster carer knows that there isn't always a happy ending but still fights Leon's corner for him in whatever way she can.

Overall I thought this was an impressive debut novel from an author who is clearly very talented and I hope there will be more to come.

My Name is Leon is published on 2nd June and is available to pre-order here.

With kind thanks to publishers Penguin Books and NetGalley for the review copy.