**Blog Tour** Inside The Whispers - A J Waines 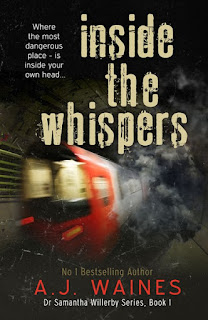 Welcome to my stop on the blog tour for Inside The Whispers by AJ Waines. After having read No Longer Safe earlier this year (you can see my review here) I was thrilled to be asked to be a part of this tour.

Inside The Whispers is the first in the Sam Willerby series and it's a cracking read, but don't just take my word for it, read the extract below and whet your appetite:


I’m ashamed to admit I was running on autopilot for my first patients. I was keen not to miss Jake. At 11.40, I phoned the unit and found out he’d arrived and was still in the consultation room.

Shortly afterwards, I sauntered past the waiting area and spotted him nodding to the receptionist, accepting a small card for his next check-up. He saw me and gave a weak smile. I asked if we could have a private word in my office. I offered him a seat in front of my desk and he sat on his hands looking like a schoolboy hauled up for smoking behind the bike sheds.

‘I know we have another session soon, but I just wanted to check a few details about the fire. I don’t want to ask you anything that might be upsetting, but are you okay to run through a few simple points?’

‘I’ve been looking at your map,’ I smoothed it out in front of him. ‘And I notice here you’ve marked stairs and here you’ve got the escalators.’

‘Yeah, that’s right – and there are two lifts around here.’

‘When you came off the train and left the platform, were you on a stationary escalator or steps? Can you remember?’

‘Definitely steps,’ he said. ‘I don’t like walking up escalators when they’ve stopped, I always think they’re going to suddenly start up again or go too fast…’

‘But, in the rush to get out, could it be that you didn’t notice you were climbing a static escalator?’

He thought for a second. ‘No – because I went past the escalators, see here?’ he pointed to the map. ‘I saw everyone was crammed onto them and got to the staircase.’

‘You said there were flames in the ticket hall – are you absolutely sure about that?’

He responded immediately. ‘God, yeah. I told you, people’s coats were on fire. It was definitely in the hall, because I remember the barriers themselves were burning.’ He started to shake.

He muttered something I couldn’t hear.

‘Let’s take a few minutes.’ I talked him through a simple grounding process to help him re-orientate himself: What day is it? What are you going to do next? Simple questions. He looked confused, but fully recovered by the time he left.


As he shut the door, I plopped down into my chair. I knew now for certain. Jake sounded so genuine and yet his story didn’t make sense. He’d told me he’d climbed up from the Central Line to the ticket hall using the steps. But, there were no steps from the platforms to the ticket hall, coming in from either east or west. I’d checked the area twice and there was access by escalators and lifts, but no steps until you want to leave the ticket hall to reach the mainline concourse.

Another part of his story didn’t add up either. He said people were on fire around him in the ticket hall, whereas the police were emphatic that the flames never got anywhere near there.

I let the silence spill across the room and stared through the seat of the chair where Jake had been sitting. One thing was clear. For some reason, Jake was lying.

Before you go rushing off to get your own copy so that you can carry on reading here's my review.

Dr Samantha Willerby is a clinical psychologist working in a London hospital when several patients come to her after being caught up in a traumatic incident on the tube, but she soon notices that despite all claiming to have been in the same place at the same time, their stories are inconsistent. It's only when Sam takes it upon herself to visit the scene that she realises that all of them are lying but she has no idea why. So imagine her horror when these victims start committing suicide. When her new boyfriend, Con, starts displaying similar symptoms of survivor guilt to her patients, Sam begins her search for the truth in the hope that she will be saving their lives.

When Sam's estranged sister, Mim, unexpectedly arrives on the scene this only adds to Sam's problems, so she turns to her colleague Dr  Leo Hansson for help, unaware that he has some complex issues of his own to deal with.

This is an intricately spun story that pulled me in right from the beginning. What reason could all these people have for lying about such a horrific event, I simply had to read on to find out. AJ Waines has a real talent for giving her characters depth so that they become real people and not just words on a page. Following the two parallel stories of Sam's professional and private life makes for compelling reading and the author's own experience of psychotherapy shone through in this book to make it extremely believable. It's full of twists and turns that had me thinking on more than one occasion that I knew who was behind it all, only to have my theories totally squashed in the next chapter. Sam is an appealing character and I'm looking forward to finding out more about her and her family over the course of this new series.


AJ Waines has sold over ¼ of a million books worldwide and topped the UK and Australian Kindle Charts in 2015 with her number one bestseller Girl on a Train. She was a Psychotherapist for fifteen years, during which time she worked with ex-offenders from high-security institutions, gaining a rare insight into criminal and abnormal psychology. AJ Waines is now a full-time novelist with publishing deals in France, Germany (Random House) and USA (audiobooks).

Her fourth novel, No Longer Safe, sold over 30,000 copies in the first month, in thirteen countries. She has been featured in The Wall Street Journal and The Times and in 2016 was ranked in the Top 10 UK authors on Amazon KDP (Kindle Direct Publishing).

The Inside the Whispers blog tour continues with all the fabulous bloggers below so be sure to follow the tour. There's also a chance for you to win a paperback copy over on Goodreads (UK only) which is running until the 27th of October so why not click here and enter. Good luck! 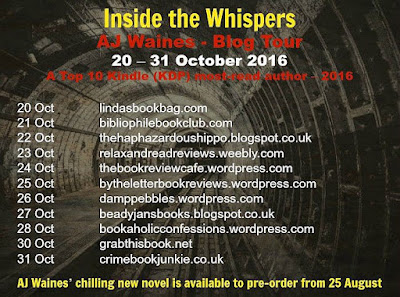 With kind thanks to author AJ Waines for the review copy.