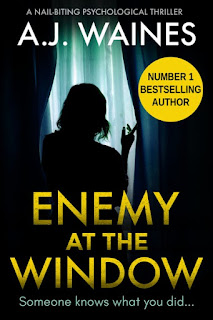 When Sophie wakes up in a psychiatric hospital she's unsure why. Her memories are limited to a few things including an argument, a woman wearing green, her husband Daniel on the kitchen floor and lots of spilt read paint but collectively she can't piece them together. Finding out that she's stabbed her husband isn't the cohesive answer that she was expecting.

As Sophie's memory slowly starts to return she remembers finding evidence that Daniel was having an affair and his repeated denials are possibly what caused the argument but would that be enough to change her usual calm and fun loving personality into that of a crazy woman requiring being sectioned?

Daniel is at home recuperating from his injuries and looking after their son Ben but strange things are happening in the house and Ben appears to be regularly managing to get himself out of his cot and is it his imagination or is his son talking to someone?

A.J. Waines is constantly raising her game with each book she writes and in my opinion Enemy at the Window is her best yet. It pulled me in right from the very start with its believable characters and fast-paced story meaning that I read it at every opportunity I had. I especially enjoyed the fact that the 'victim' was a male which turned the perspective on it's head compared to most other psychological thrillers I've read recently. As always Alison's previous life experience as a psychotherapist is clearly evident as she certainly knows how to mess with your head and lead you down the garden path! If you enjoy a thriller that's full of secrets, lies and deception and you're looking for something to read this summer you simply must have Enemy at the Window on your list!

A. J. Waines is a number one international bestselling author, topping the entire UK and Australian Kindle Charts in two consecutive years, with Girl on a Train. Following fifteen years as a psychotherapist, the author has sold nearly half a million copies of her books, with publishing deals in UK, France, Germany, Norway, Hungary, Czech Republic and Canada.

Her fourth psychological thriller, No Longer Safe, sold over 30,000 copies in the first month, in thirteen countries. A.J. Waines has been featured in The Wall Street Journal and The Times and has been ranked a Top 10 UK author on Amazon KDP (Kindle Direct Publishing).

She lives in Hampshire, UK, with her husband. Find her books here and visit her website and blog, or join her on Twitter, Facebook or on her Newsletter.

Make sure you follow the rest of the tour with these fabulous blogs: 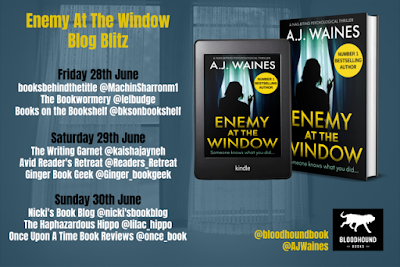