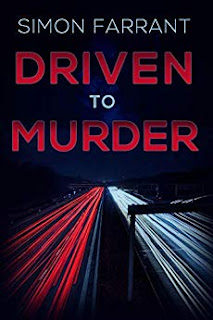 Driven To Murder is the fourth book in the Newdon Killers series but it can easily be read as a standalone. That said, I would recommend that you read the previous three books as well - just because they're great and I don't want you to miss out!


Joel Simpson is a happily married driving instructor who takes pride in his work and cares about his students. When one of them starts turning up with various bruises Joel is concerned that she could be a victim of domestic abuse. He broaches the subject with Cairan on several occasions and even tries to persuade her to leave her partner Sam but Cairan just shrugs the whole thing off.

Convinced that Cairan is having an affair with Joel, Sam starts showing up at the social club where Joel regularly meets his friend Tony. One night, while the three men chat over their pints, Sam gets very drunk, very quickly thanks to the vodka that's being slipped into his pints. Towards the end of the night Joel, seeing just how wasted Sam is, becomes concerned for Cairan's welfare so he sends her a text suggesting that she spend the night at a friends before they all get in a taxi and take Sam home.

The next morning there's a grisly discovery at Sam and Cairan's house but what exactly has gone on and who was responsible?

Driven to Murder is another cracking story with characters that I liked even when I should have been repelled. I love Simon Farrant's fictional town of Newdon, but boy am I glad that I don't live there. This town seems to be a magnet for dysfunctional individuals! With great pace and enough twists and turns to make you dizzy, it kept me guessing right up until the final page. A gripping read that I'd thoroughly recommend if you enjoy your thrillers a little bit darker.

With kind thanks to author Simon Farrant for the review copy.
Posted by Neats at 09:04