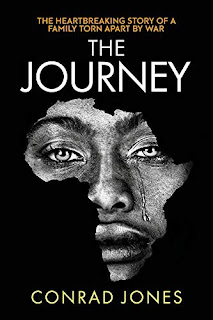 This was the first book I've read by Conrad Jones and it was superb, however, given the subject matter it feels really wrong saying that I enjoyed it.

Kalu, Esse and their three children live a quiet life in a small village in Nigeria until Boko Haram arrive in their masses. The devastation and destruction that follows is horrendous and Kalu knows that he needs to get his family away . . . and fast.

Luckily Kalu had been planning for this eventuality and he had several things in place should the family ever need to make a swift escape and unfortunately for them that time had come and they set off on the journey.

What follows is a terrifying trip littered with close encounters with Boko Haram which left me literally holding my breath as I was reading, not daring to draw breath again until I knew that all of the family were safe.

The Journey is a story of one families journey to escape the atrocities that are becoming all to familiar in today's world. I'm sure that we're all guilty of hearing about the plights of people so desperate to escape their home towns in search of a safer life and not giving it a second thought, myself included, but after reading Conrad's book it's definitely shone a whole new light on things for me. Imagine being so desperate that you would do anything to protect your loved ones, imagine not being able to trust anyone and imagine witnessing things so appalling that you'd have nightmares, this is exactly the situation that thousands of innocent people are in and the reason why they are so desperate to escape.

This is a book that, despite being harrowing, is also filled with a warmth of family love and hope for a better future. An outstanding true to life portrayal of humanity at it's best and worst and a book that will haunt me for a long time to come.


Conrad Jones a 52-year-old Author, living in Holyhead, Anglesey, which I class as my home, before starting a career as a trainee manger with McDonalds Restaurants in 1989. I worked in management at McDonalds Restaurants Ltd from 1989-2002, working my way up to Business Consultant (area manager) working in the corporate and franchised departments.

In March 1993 I was managing the Restaurant in Warrington`s Bridge St when two Irish Republican Army bombs exploded directly outside the store, resulting in the death of two young boys and many casualties. Along with hundreds of other people there that day I was deeply affected by the attack, which led to a long-term interest in the motivation and mind set of criminal gangs. I began to read anything crime related that I could get my hands on.

I link this experience with the desire to write books on the subject, which came much later due to an unusual set of circumstances. Because of that experience my early novels follow the adventures of an elite counter terrorist unit, The Terrorist Task Force, and their leader, John Tankersley, or `Tank`and they are the Soft Target Series, which have been described by a reviewer as ‘Reacher on steroids’.

I had no intentions of writing until 2007, when I set off on an 11-week tour of the USA. The Day before I boarded the plane, Madeleine Mcann disappeared and all through the holiday I followed the American news reports which had little or no information about her. I didn’t realise it at the time, but the terrible kidnap would inspire my book, The Child Taker years later. During that trip, I received news that my house had been burgled and my work van and equipment were stolen. That summer was the year when York and Tewksbury were flooded by a deluge and insurance companies were swamped with claims. They informed me that they couldn’t do anything for weeks and that returning home would be a wasted journey. Rendered unemployed on a beach in Clearwater, Florida, I decided to begin my first book, Soft Target. I have never stopped writing since. I have recently completed my 20th novel, The Journey, something that never would have happened but for that burglary and my experiences in Warrington.

As far as my favourite series ever, it has to be James Herbert’s, The Rats trilogy. The first book did for me what school books couldn’t. It fascinated me, triggered my imagination and gave me the hunger to want to read more. I waited years for the second book, The Lair, and Domain, the third book to come out and they were amazing. Domain is one of the best books I have ever read. In later years, Lee Child, especially the early books, has kept me hypnotised on my sunbed on holiday as has Michael Connelley and his Harry Bosch Series.

You can find out more about Conrad, his books and connect with him using the links below:

Be sure to check out the rest of the blog tour with these fantastic blogs: 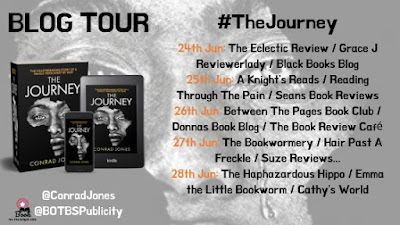 With kind thanks to Sarah at Books on the Bright Side for the review copy and my stop on the tour.