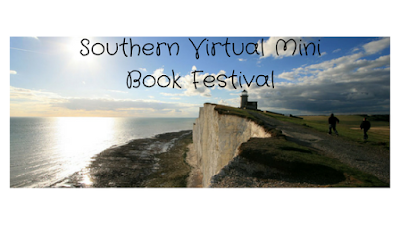 Well what a weekend it's been, so many lovely authors, lots of fabulous guest posts and loads of fantastic books. . . .  but it's not quite over yet! There's one more lovely lady that I'd like to introduce you to and that's Paula Harmon, author of two short story collections, Kindling and The Advent Calendar.

Let's start by finding out a bit more about her books. 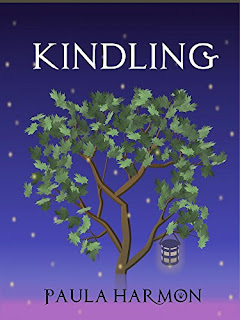 This is a collection of funny, sad, thoughtful stories about the world beyond the obvious.

'And so, here she stood, at the edge of the copse, beyond the house in which the sweet-munching spoilt boy with black rotten teeth had lived; beyond the collapse of corrugated iron which had been a pig pen; beyond the tree she and Ffion had climbed to hide from their little sisters; beyond the bracken where they played cowboys and indians; beyond the blank nettly, brambly space where the playground had been, where the teenagers had mocked their attempts to touch the sky on the swings; beyond the rocks they’d climbed and from which, alone again, she had sometimes sat and stared at the mountain on the other side of the river, a greenish mound like a giant settled for a sleep.’

Once there was a little girl who spent a lot of time alone. She sat under trees and sheltered in caves and hollows. She sat under bridges and looked downstream. She looked into mirrors and into books and out of windows onto storms crashing over the mountains. She imagined.

She grew up, but she has never stopped imagining. 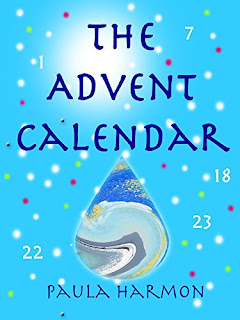 You have been given an old fashioned advent calendar.

Every day in December you open a door and find a picture.

Each one is a picture representing Christmastime.


Paula lives in Dorset with her husband and two teenage children and is currently trying to work out why she thought it would be a good idea to include alpacas in the novel she's writing, when it's about wolves and witches.

Paula's currently working on a new book and today she's interviewing one of the main female characters, Rose.

Interviewer (suddenly sombre, dropping voice): Of course, I should say how sorry I am for the loss of your husband David.

Interviewer: Tell me more about the impact of that terrible accident. I understand your brother Simon is still recovering. I gather you’re looking after Simon as he recuperates and pulls together the tattered remains of his career.

Rose: The series he was filming when the accident happened is about to air and he’s got a new series lined up with even more funding and he’s generally quite well. He just has… episodes… when he has to tune out a little. As for me… I’m sort of investigating new music now, doing a bit of composing and I’m thinking of joining a ….

Interviewer: Oh I expect David was filming your band back in the day and that’s how you met.

Rose: No, he was a wildlife photographer. Simon is a naturalist remember. You don’t tend to find much wildlife in an orchestra. Except possibly in the timpani section. I met David in a pub on Simon’s 30th birthday. It was only five years ago but since he was shot last year, since the accident it seems…

Interviewer: Well time’s a great healer. I gather you and Simon have moved into the middle of nowhere. Whatever do you do with your time? I suppose you’ve joined the local ladies’ guild.

Rose: I’m trying to avoid them like the plague, but they won’t leave me alone. They’re up to something, I’m just not sure what, but I’m pretty sure it’s not knitting they do in the wee small hours. Anyway, I’ve got enough on my plate trying to work out why this girl keeps turning up naked, borrowing my clothes and running away. It was more peaceful in the city, I swear.

I'm looking forward to finding out more about Paula's work in progress and I hope that she'll come back and tell us more about at a later date. In the meantime if you've read either of her collections of short stories please do share your thoughts in the comments at the end of this post.

If you'd like to find out more about Paula, her books, or connect with her you can use the links below:

I'd like to say a big thank you to Paula for taking the time to stop by today and giving us a sneaky peak into her current work in progress. I hope the writing's going well and do keep us posted!