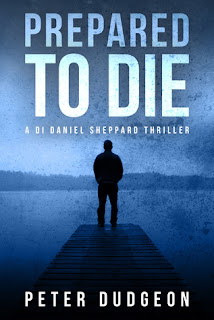 Having read and enjoyed Peter Dudgeon's previous books I was thrilled to be offered an ARC of his upcoming release Prepared to Die.

This is a story that starts off innocently enough with a grandmother and her grandson enjoying a day out at the zoo but things quickly take a horrifying turn for the worse when the loving grandma is forced to throw herself into the rhino enclosure. If that wasn't bad enough, the perpetrator then proceeds to blow her own head off!

Fast forward three years, reclusive artist Sebastian Fallon has been found brutally murdered in his home. Nearby is another body, that of his suspected murderer and it looks like they took their own life. What is going on?

DI Daniel Sheppard is returning to work after having taken time off to nurse his dying wife, but he's had enough of rattling around at home, on his own with far too much time on his hands so he decides to go back to work and it's down to him to investigate this seemingly open and shut murder - suicide. When another strikingly similar incident occurs Daniel and his team have to start digging a bit deeper to discover the truth.

Initially I struggled to get to grips with the number of characters that I encountered within the first few chapters but once I got to grips with them all I found that the story flowed well. Daniel was a very likable character, vulnerable but strong at the same time. His investigative style was certainly different and not all of his colleagues, and certainly not his boss, always agreed with his methods.

Although I enjoyed this book, I felt that it lacked a little in pace given the impact of the opening chapter. I was expecting a few more heart-racing moments than I got but that said, Peter Dudgeon has set down some great foundations for what I hope will become a series featuring DI Sheppard and his team.

Prepared to Die will be published on the 25th May and is available to pre-order here.

With kind thanks to author Peter Dudgeon for the review copy.