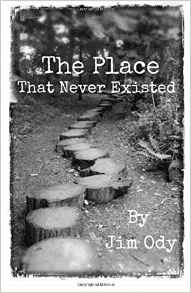 The Place That Never Existed is the first book I've read by author Jim Ody. You never know quite what you're going to get when you read an author that's new to you so I was looking forward to reading this.


Debbie and Paul have just got married and are spending their honeymoon in a secluded cabin in the woods near Huntsman Cove in Devon. Far from the reaches of the internet and mobile phones the couple set out to explore the surrounding area and soon they stumble upon the old Dudley House and decide to take a look around. Unbeknown to the couple the house is the place of local legends and known for the bad things that happen there and not somewhere that someone wants them to be.

But Paul has an ex-girlfriend who can't accept that their relationship is over and is determined to get Paul back. When Debbie's hapless brother Jez inadvertently reveals the couples honeymoon destination it's not long before there are several other people heading towards Huntsman Cove.

This is a well plotted and enjoyable read with some great humorous moments littered throughout. Full of peculiar characters who each appear to have their own agenda's through the book but it's not until the last third of the book that all the strands are pulled together. I really enjoyed Jim Ody's style of writing, however, for me the ending let it down slightly. I felt that it could have been expanded on so that it didn't come across as being so rushed. That said, overall, it was a gripping, fast-paced read and I wouldn't hesitate to pick up another book by this author.

With kind thanks to author Jim Ody for the review copy.