Song Of The Robin - R.V. Biggs 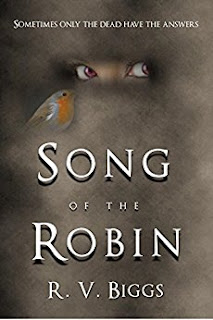 A few weeks ago I handed over my blog to Robert Biggs, author of Song of the Robin. Robert wrote a fascinating post revealing how the idea for his book came about and allowed me to share an excerpt (you can read that post here). He also very kindly sent me a review copy and I raced through it last weekend.


Sarah is married to Steve, but the marriage has gone sour leaving Sarah feeling despondent and taken for granted. After a particularly nasty argument Sarah storms out of the house to try and calm down  and when she returns home Steve is nowhere to be seen. Still suffering from a headache that she can't seem to shake off she relaxes on the sofa but the next thing she knows she wakes up in bed the next morning with no recollection of how she got there and still no sign of Steve.

While out walking her dog Mags, she's convinced that she can hear voices but she can't see anyone nearby so she thinks that it's just her imagination  playing tricks on her. Over the next few days she begins to have episodes where she appears to drift off but when she snaps back into reality chunks of time have gone by without her realising. It's during one of these episodes that she first notices a man who appears to be watching her and she has a niggling feeling that she should know who he is.

Sarah finally confides in her best friend Rachel, telling her about her unshakeable headache, the voices and the mysterious man she keeps seeing and like any good friend Rachel is concerned, advising her to see a doctor. Sarah wants to deal with this in her own way but it soon becomes apparent that everything is not quite as it seems and she might not be able to get through this on her own.

I don't want to give any more details about the plot for fear of unintentionally giving something away, but what I will say is that this is a story full of twists and turns that kept me in suspense right until the end.

Song of the Robin is a beautifully written and well crafted book in which the author exquisitely reveals Sarah's story in both the past and present.  I was immediately drawn into the story, wanting to find out exactly what was going on and where her story was leading. Each character was developed perfectly and in such a way that I found myself becoming a part of Sarah's family and could totally empathise with what they were going through. Sarah's confusion was palpable and once I found out exactly what had happened I could see everything I'd read made perfect sense.

This is a tale about kismet as well as family and the strong bonds between them even when they're not with you anymore. I particularly loved the quote at the beginning of the book, "When a robin redbreast constantly visits you or crosses your path, a loved one in heaven is trying to say 'Hello, I'm with you.'" This is something that many people, myself included, believe to be true and it's a theme that subtly runs throughout the book. I was reading this book whilst enjoying the glorious sunshine last weekend and on both occasions a robin came and perched on the fence in our garden, seemingly watching me, maybe he was trying to prove a point!

R. V Biggs has written, in my opinion, a captivating debut novel that I would highly recommend and which deserves more recognition. Song of the Robin is currently available to download for just 99p so why not take a chance on it? You might love it as much as I did!

With kind thanks to author R. V. Biggs for the review copy.