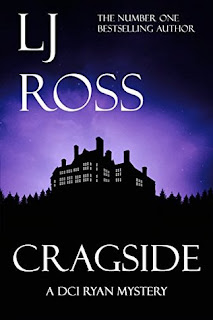 I love DCI Ryan and this amazing series of books so when author LJ Ross emailed me to ask if I'd be interested in reading and reviewing Cragside I jumped at the chance.

Having had to relocate Ryan and Anna are temporarily living in a cottage within the grounds of Cragside. They have been invited to a Victorian themed murder mystery evening and while history lover Anna is looking forward to it, Ryan isn't relishing the idea of dressing up. Once there though, Ryan sees everyone else in costume and settles down a bit until suddenly all the lights go out. Initially everyone thinks that it's a planned part of the evening until one member of staff assures them that it's not and heads off to try to fix the problem. When they don't return to the party Ryan goes off in search of the elderly valet, only to find him in a crumpled heap at the bottom of a staircase. Initially it appears to be an unfortunate accident but when another death is reported the very next day Ryan suspects the two deaths are linked and they have a killer in their midst.

LJ Ross is an outstanding writer and each book has just the right mix of gripping plot combined with the camaraderie of characters that I've very much grown to know and love and Cragside is no exception . Ryan's team are all engaging characters in their own right and each of them have had to battle with their own demons at some point throughout this fantastic series but this never detracts from the story and helps to bring an even greater sense of reality and connection to the reader.

Writing a great book is an accomplishment in itself, but to write a whole series, that in my opinion just gets better with each book, is for me, as rare as hens teeth. In my experience of  several series of books I find that the author doesn't do enough to keep the sparkle alive within each book but this is definitely something that Louise has mastered. If you've read any of the DCI Ryan books then you'll know exactly what I'm talking about and if you haven't read any of them then you really are missing out on some amazing books so don't just take my word for it, do yourself a favour and hook yourself up with a date with DCI Ryan.