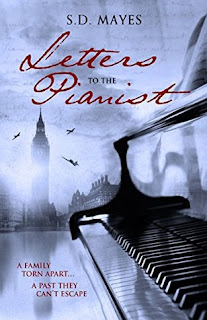 If you're a regular reader of my blog you'll know that a few weeks ago I handed over to author S.D. Mayes and one of her characters from her book Letters to the Pianist. If you missed it you can read it here.

The ebook was published last month and as from today it's available in paperback as well so what better time for me to share my review with you all.

Historical fiction is a genre I love but one that I don’t tend to read that often. When I heard about Letters to the Pianist I knew that it was a book that I wanted to read and after reading her post and fleetingly being introduced to one of the characters I couldn’t wait to dive in.

The year is 1941 and fourteen year old Ruth is living in the east end of London with her parents and her two younger siblings, Hannah and Gabi. They are a happy family but life is hard for everyone during the war and the Goldberg’s are no exception. The true horror of the war first affects Ruth when she stumbles across her best friend’s body in some rubble not far from their home but nothing can prepare her and her brother and sister when soon after their own home is bombed.

With both their parents presumed dead they’re sent to live with Aunt Fenella and Uncle Harry who don’t appear to be affected by the war as their larder is still overflowing and life seems to be carrying on as normal. It soon becomes apparent that Aunt Fenella isn’t happy having three children running about her home so she decides that Hannah and Gabi should go and stay with Aunt Betty in Dorset. Ruth wonders why she couldn’t go with them but it seems that Aunt Fenella isn’t keen on getting her hands dirty so all of the domestic chores fall to Ruth while Uncle Harry. . . . . .well, the less said about Uncle Harry the better I think!

While all this is going on a man wakes up in hospital. He was found unconscious in the rubble and initially taken to the morgue, but when he suddenly emitted a loud groan he was moved to the hospital where it was found he was suffering from amnesia. With the help of one of the doctors he discovers that he’s a talented pianist and he adopts the name Edward. Thanks to a visitor that Edward has while he’s in the hospital his life takes an unforeseen turn and he is soon married into a wealthy family and becomes a world famous pianist.
Following Ruth and Edwards’ stories we can see how different their lives are and then find out how the two stories are connected.

Letters to the Pianist is a beautifully written and obviously well researched book that I honestly couldn’t bear to be parted from. The characters were so wonderfully portrayed that I felt so close to them and feared what would happen to them if I left them alone while I slept, ate or participated in anything else that caused me to lay the book to one side. This is a story about love, loss, faith and family and I would highly recommend it to anyone who is a fan of this genre. I know that this book was several years in the making but if it takes S.D. Mayes a few years to research and write her next book then this is one book lover who will be more than happy to wait if the end result is as outstanding as Letters to the Pianist.
With kind thanks to author S.D. Mayes for the review copy.