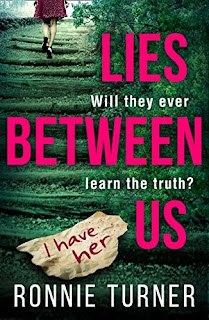 I'm thrilled to be a part of this epic blog tour for Lies Between Us by Ronnie Turner. If you're wondering why it's such an epic tour, it's because Ronnie is also a book blogger and this is her debut novel so naturally the blogging community all wanted to show their support.

Where do I start with Lies Between Us without giving too much away? There are three main stories, told in alternating chapters, by three different people, which are cleverly and intricately woven together. Miller is a young boy who is riddled with issues, mainly obsession and jealousy. Then there's John, happily married to Jules, their world crumbles when their young daughter is kidnapped from the family home. As if that's not bad enough, they receive worrying messages from the perpetrator which only adds to their horror. Last, but by no means least, there's Maisie, who as an ICU nurse is taking care of a patient who was attacked and left for dead. Despite having her own issues she becomes involved with the man's family and convinces herself that the sick man's wife knows more about the attack than she's letting on.

As much as I love a dual/multiple timeline novel, I have to admit that I was more than a little confused with this one for a while and even now after finishing it I'm not one hundred percent convinced that I genuinely got it. That said Lies Between Us is a cleverly thought out and complex thriller. I particularly enjoyed getting inside Miller's head - a sick individual who realises that by presenting himself to the world as a 'good boy' he is able to manipulate those around him, but one who will stop at nothing to get what he wants. I can only describe him as a truly heinous character, just the type I love to read about! Discovering how these three storylines were going to connect made for tense reading and the journey was disturbing in places. I would recommend this book to fans of psychological thrillers but allow time to fully dedicate yourself to the complex twists and turns of this solid debut novel. Ronnie Turner is definitely on my list of authors to watch out for!


Ronnie Turner grew up in Cornwall, the youngest in a large family. At an early age, she discovered a love of literature and dreamed of being a published author. Ronnie now lives in Dorset with her family and three dogs. In her spare time, she reviews books on her blog and enjoys long walks on the coast. She is currently working on her second novel.

Ronnie's debut novel, Lies Between Us, will be published by HQ Digital in October 2018.


You can find out more about Ronnie and connect with her using the links below:

Be sure to follow the rest of the blog tour with these fabulous blogs: 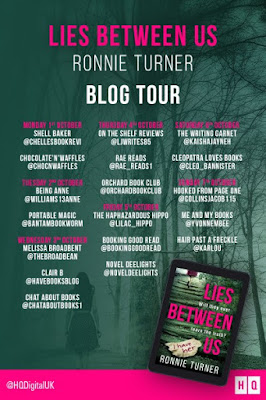 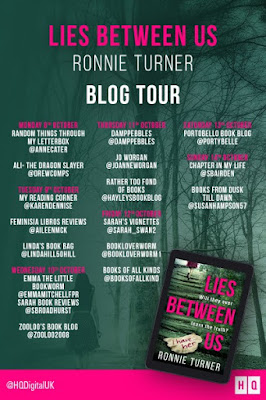 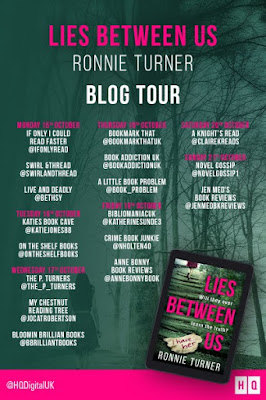 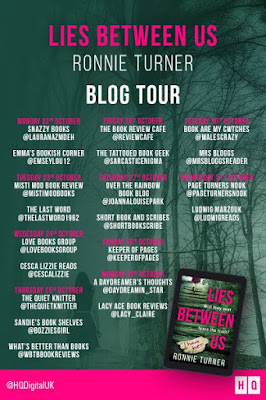 With kind thanks to author Ronnie Turner, HQ Digital and NetGalley for the review copy.