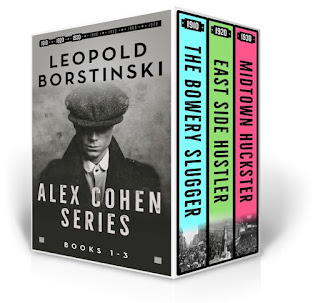 I'm thrilled to be taking part in the blog tour for this fantastic series of books by Leopold Borstinski. I've been a huge fan of fictional character, Alex Cohen, it's a series that just gets better and better with each book and the first three books are now available as a boxset.

Here's a bit about each book followed by my reviews.

Three decades in the life of Jewish gangster, Alex Cohen, as he arrives in the US and forges a life for himself and his family using the blood, sweat and tears of those who stand in his way.

This digital box set contains the first three books in the saga of Alex Cohen's life:

The Bowery Slugger: When Alex Cohen arrives in 1915 America, he seizes the land of opportunity with both hands and grabs it by the throat. But success breeds distrust and Alex must choose between controlling his gang and keeping his friend alive. What would you do if the person you trusted most is setting you up to die at your enemies' hands?

The Bowery Slugger is the first book I've read by Leopold Borstinski but it definitely won't be the last!

The year is 1915 and Alex and his Jewish family have travelled to America from Ukraine in search of a safer and better life. The family have very little but manage to find somewhere to live in a tenement and teenage Alex quickly falls in with one of the gangs in The Bowery. This means that he is able to support his family but he tells his family very little about his 'work' as he knows that they won't approve and will worry for his safety.

It doesn't take Alex long to move up the ranks within the gang but this is a double-edged sword as although it means that he's able to earn more money, it also means that he has to increasingly watch his back, as the higher he rises, the less people he can trust.

The other issue he has is that he thinks he could be falling for a girl who lives with her family in the same tenement as him but she views his choice of career badly and tells him in no uncertain terms that although she also has feelings for him, all the time he is a part of the gang they have no future together. Alex seems to be stuck between a rock and a hard place, which way will he choose to turn?

The Bowery Slugger is a captivating read, with engaging characters that creates a real sense of atmosphere as well as giving a fascinating insight into life for an immigrant trying to survive in a foreign country whilst knowing little of the language. Although this is a tale packed full of violence, I didn't feel that it was unjustified, when people are struggling to survive they will do anything they can to ensure they can put food on the table and a roof over their families heads. The pace is fast and I was completely swept away by the author's skillful story-telling and character deveolpment.

I'm looking forward to finding out what comes next for Alex and I'm eagerly awaiting news of book two in the series. If you enjoy a gritty crime thriller then I'd highly recommend that you give this little beauty a try.


East Side Hustler: Alex returns from the Great War almost destroyed by the horrors he has experienced. When he is plucked from certain death by an old friend, he commits to making so much money he'll never know that agony again. But the route to the top is filled with danger and every time he helps one of his powerful friends like Al Capone, he acquires more enemies who want to see him dead. The turmoil caused by the death of organised crime financier, Arnold Rothstein means Alex must once more fight for his life. How far would you go to seize the American dream? And could you protect your family along the way from the fellas who want to see you dead?

Alex has returned to New York from the frontline in WW1 and life isn't easy for the one-time hustler. He's begging on the streets, suffering from which we now know as PTSD and life is hard. Just when he's at his lowest, his luck changes and he reconnects with old friends which leads to him getting back into the world of organised crime.

Things have moved on in The Bowery and with Prohibition on the horizon all the gangs want the upper-hand and life is even more perilous. Some are more willing to work together than others but knowing who to trust gets more and more difficult and allegiances are tenuous. Alex is lucky that his previous reputation is still strong but could that make him a target as he could be seen as a threat.

East Side Hustler is another sharp and gritty read from Leopold Borstinski. With a great cast of characters, including an appearance of Al Capone, it's a thrilling combination of crime and history and a truly insightful glimpse of life in the roaring 20's when many people defied Prohibition and  rejected many traditional moral standards.

I still can't help being intruigued by Alex. He is a hugely likeable character, despite his hard man exterior, he cares deeply for his family and does everything he can to ensure that they are safe and secure. I'm sure that the next part of his journey will be just as captivating and I can't wait to find out what's coming next.


Midtown Huckster: Alex runs Murder Inc for Lucky Luciano. After the death of Prohibition he must find a new way to make money, just as the cops are baying at his heels. When Luciano goes down for racketeering, Alex loses his protection and is arrested for tax evasion-he must decide between saving his skin and ratting out his friends. If he chooses prison time then his gang will fall apart and he will end up with nothing. If he squeals then he will have to flee the city he loves and the family he once adored. What would you do in a world where nobody can be trusted and you have everything to lose?

I'm absolutely loving the Alex Cohen series by Leopold Borstinski and I couldn't wait to dive back in to find out what was next on the cards for this exciting character.

Prohibition is coming to an end and Alex needs to find new ways to earn money. He's a member of the ominously titled Murder Corporation, carrying out hits on whoever the syndicate feels has wronged them, but he also needs a more regular source of income.

At the same time, his private life is in turmoil. His estranged wife Sarah is against any kind of reconciliation and he knows that he isn't spending enough time with his boys who are growing up fast. If that wasn't enough to deal with, there's also someone lurking in the background, determined to take Alex and the whole of the syndicate down, Special Prosecutor, Thomas Dewey. The heat is definitely on for Alex this time!

This is a series that just goes from strength to strength with each book. Alex is a strong protagonist, who, despite wanting to get further up the mobster's ladder, is loyal to those he cares about but he also shows a vulnerable side which I feel adds to the authenticity of the character.

Midtown Huckster is a compelling read that gives a hard hitting and unapologetic glimpse into the dark and disturbing world of gangster life in 1930's New York. Flowing effortlessly from chapter to chapter Leopold Borstinski knows how to write a story that will keep his readers gripped and on their toes for the duration. I'm so pleased to hear that there are several more books to come in this series - my only problem is the wait between each one!

Leopold Borstinski is an independent author whose past careers have included financial journalism, business management of financial software companies, consulting and product sales and marketing, as well as teaching.

There is nothing he likes better so he does as much nothing as he possibly can. He has travelled extensively in Europe and the US and has visited Asia on several occasions. Leopold holds a Philosophy degree and tries not to drop it too often.

He lives near London and is married with one wife, one child and no pets.

Follow the rest of the blog tour with these fabulous blogs:

You can find out more about Leopold, his books and connect with him using the links below:

With kind thanks to Emma at Damppebbles Blog Tours for my stop on the blog tour.
Posted by Neats at 07:30