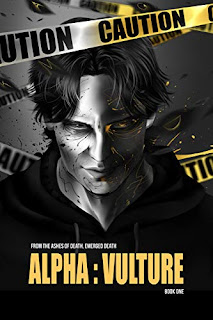 ALPHA : VULTURE is a very different kind of crime novel. Told from the killer's perspective, whose name we don't discover until the end of the book, this is a brutal tale about a serial killer, unlike anything I've read before.

For a relatively short book it defnitely packs one hell of a punch! I read it in one sitting and it blew me away.

Our killer had a troubled and violent childhood (don't they all?) but instead of making him aggresive, it gave him a different view of the world around him. He's not concerned with what's right or wrong and he's certainly not worried if you, the reader, agree with him or not - he's already killed 13 people and he's planning on killing 13 more!

Despite the fact that he has a plan, as is the way with life, things don't always turn out as expected. Add in the fact that he's also dealing with his own mental health and you've got a very unique protagonist on your hands. He wants to have a purpose for living, to be happy both inside and out, but being true to himself is hard and he's continually searching for what he wants from his life.

This is a very clever book that is sprinkled with humour and derisive observations about the world we live in today, as well as the dark insights into the mind of someone with a mental illness. It's very graphic in parts and that's what makes this scary, after all life isn't all butterflies and rainbows for everyone is it?

If you're looking for a crime novel that's a little different, I would thoroughly recommend ALPHA :  VULTURE and it's currently only 99p to download (Or free on KDP)so why not give it a try? It's a three part series and I'm waiting with bated breath for books two and three!