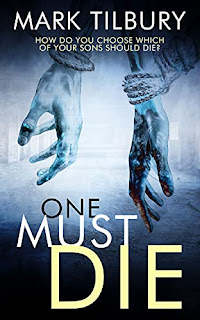 One Must Die is another must read book by the King of Twisted, Mark Tilbury!

Seans wife Laura, was the victim of a hit and run driver and since she passed away his main focus has been his teenage sons, Peter and Ben. Obviously he will do everything he can for the boys, so imagine his horror when one Friday night they don't return home from their weekly army cadets meeting. It doesn't take long for him to discover that the boys didn't even arrive at their intended venue and naturally panic sets in. Sean is convinced that something terrible has happened to them but he's prepared to let the police do their job - until an innocent looking piece of mail drops through his letterbox that changes everything.

What follows is an increasingly atrocious series of demands from the person who has abducted his sons which sets Sean off on a deadly path that just doesn't bear thinking about.

Mark is very clever at creating characters that you'll become so emotionally attached to they feel like family, which then makes the horrifying events that befall them even more horrific and One Must Die is no exception. My heart was in my mouth each time Sean received another DVD through his door but I took a little comfort knowing that his father-in-law was there to offer his support. The chapters where we caught up with the boys were traumatic but also heartwarming as we get to see what a fantastic bond they have. As for the chapters from the abductors point of view - well, what can I say - they were bone chilling! This person had, what they believed, were genuine reasons for their actions and they weren't going to stop until they reached, what they believed, would be a satisfactory conclusion.

One Must Die is a truly gut-wrenching but stunning read that will have you chomping on your finger nails and holding your breath at the same time! Another fabulous addition to the ever growing list of fantastic books from this immensely talented author.

You can follow the blog tour with these wonderful blogs:

With kind thanks to Mark Tilbury for my review copy.