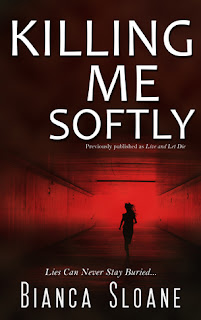 Killing Me Softly was previously published as Live And Let Die and was Bianca Sloane's debut novel. Regular readers of my blog will know that I reviewed Every Breath You Take a few months ago and I loved it so I was looking forward to reading another novel from the same author.

Tracey Ellis marries Phillip but when she disappears while out jogging one cold January evening and is found dead a few days later her sister Sondra can't get to grips with it.


A year later Phillip writes a letter to Tracey's mother telling her that he has remarried and when Sondra finds out her interest is piqued. She always had her doubts about her sister's marriage to Phillip, as she didn't think that he was her sisters usual type and he seemed to be a little odd. So when she unexpectedly runs into Tracey's ex and finds out that the marriage wasn't as happy as everyone thought Sondra decides to take matters into her own hands.

As usual I don't want to give much away so I'll just say that what follows is a dark and disturbing tale of lies, deceit, manipulation, domestic abuse, secrets, jealousy, fear and insecurities. I really wanted to read this book slowly and savour every page but it was impossible. The nearer you get to the end, the more the suspense and tension ramps up and I found myself reading faster and faster as I had to know what happens and just when you think the whole story has reached it's conclusion, you're hit with one last sting in the tale, which I certainly didn't see coming.

If you've never had the pleasure of reading a Bianca Sloane novel and you enjoy a gripping psychological thriller then firstly I'm jealous as I would love to read them again oblivious as to what was coming next and secondly this novel is free on Amazon at the time of writing this review. So what are you waiting for?