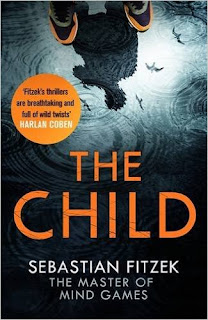 My name is Simon. I'm 10 years old. I'm a serial killer.
Robert Stern, a successful defence lawyer, doesn't know what lies in store for him when he agrees to meet a new client in a derelict estate on the outskirts of Berlin. To his astonishment, the defendant is a ten-year-old boy - Simon - a fragile child with a chronic illness who insists that he was a murderer in a former life. Stern's surprise quickly turns to horror as he searches the cellar Simon has directed him to and discovers the skeletal remains of a man, the skull split with an axe - just as Simon told him he would.
But this is only the beginning, as Simon tells Stern where to find even more victims whose bodies have lain undisturbed for years. Suddenly, the present feels murderously dangerous as well...
The Child is a darkly twisting, page-turning thriller that will make your heart pound with adrenaline.

When I read the above blurb I knew that this was a book that I wanted to read but the story I got wasn't what I was expecting. As I read on the story quickly changed from being about a serial killer to one about reincarnation, child trafficking and paedophilia.

I found this a difficult book to read at times. The plot was confusing, it was just too unbelievable and implausible and parts of the translation were a bit clunky. Towards the end it was almost as if the author wasn't sure how to end the book and there's a large section that just retells the story which I felt was unnecessary.

Overall if you can suspend your beliefs this isn't a bad read and it would keep you engrossed for a few hours.

With kind thanks to NetGalley for the review copy.