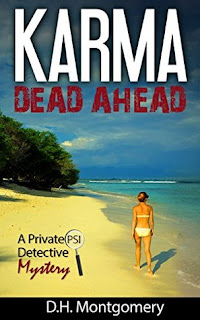 Karma Dead Ahead is a terrific read and D.H. Montgomery is an author that I'll be watching out for in the future.

This book is a wonderful mix of humour and suspense and right from the word go I found myself laughing out loud.

Sagacity and Chance are two graduate students in a university paranormal research lab who find themselves on a Caribbean island searching for Amanda Prosner who has failed to return from her holiday there. Amanda had a strong feeling that something bad was going to happen to her while she was away so she contacted Sagacity and Chance before she left and asked them to look for her if and when she didn't return.

The two detectives turn to the Gang of Four, a group of four psychics from a local spiritualist church to help them try and work out what's happened to her and the identity of the mystery man that managed to lure her to the islands.

What follows is a series of events that involve a meteorite, a witch who develops phone apps, corrupt officials, a rather large python and a duo who are totally oblivious to the fact that they have become worldwide celebrities.

I loved every page of this book. The story flows well and the characters are so realistic. I especially loved the interactions between the members of the Gang of Four who all have their own individual psychic traits which makes them mix about as well as oil and water at times. The relationship between Sagacity and Chance is also an amusing one and you could almost compare them to Sherlock Holmes and Dr Watson as Sagacity is the natural leader and thinker while Chance is more of the side-kick who is just looking for a quiet life. D.H. Montgomery has a natural flair for making his characters real and likable while still being believable as well as telling a story that straddles different genres effortlessly. I was stunned when I read that the whole novel came about over the course of about a month as I've read books that have taken a lot longer to write that pale into comparison. Even the Note to Readers at the end of the book is wonderfully written and gave me a feel for the author behind the words. Karma Dead Ahead is only 99p on Amazon at the time of writing this review and I think it's well worth it.

With kind thanks to author D.H. Montgomery for the review copy.