On Track For Murder - Stephen Childs 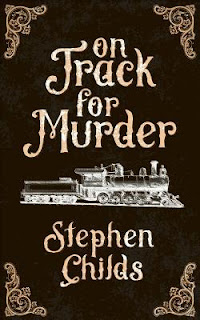 On Track For Murder tells the story of Abigail Sergeant as she leaves London with her younger brother Bertrand to go and live with their father and step-mother in Australia at the end of the 19th century.

Their journey onboard the SS Elderslie is a treacherous one, the sea is rough and Abigail finds herself on the receiving end of some unwelcome attention from a sleazy crew member named Briggs.

When they finally disembark at their destination and make their way to their fathers house it's not long before their hopes of a wonderful life with their father are shattered and they're caught up in a murder investigation.

The police are convinced that they have the killer but Abigail doesn't agree and sets out to prove their innocence with the help of young police constable Ridley Dunning.

What follows is an epic train journey across Western Australia, with Abigail facing deception, kidnap, sabotage and arson, which forces her to draw on a determination she didn’t know she possessed.

On Track For Murder is a clever mix of murder mystery, history with a large dose of romance which makes for an enjoyable read. This wasn't a fast paced story but the twists and turns were frequent enough to keep my interest and want to find out who the real killer was.

With kind thanks to Authoright for the review copy.