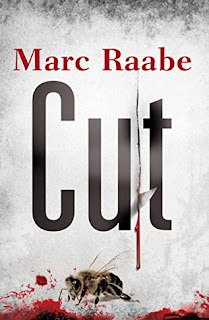 As soon as I read the synopsis for Cut I knew it was a book I wanted to read, the reality however was slightly disappointing.

Gabriel spent twenty years of his life in an institution after the death of both of his parents, but now he's out, working as a security guard and trying to move on with his life. When the alarm is triggered at a derelict house and he receives a frantic call from his pregnant girlfirend Liz, his life is once again turned upside down and he's forced to revisit the past horrors of his childhood.

Someone from Gabriel's past has kidnapped Liz, he's out for revenge and nothing is going to stop him.

I found the authors writing style quite difficult to connect with but I don't know if it's the writing or the translation itself. The story was unbelievable in places (one example is people being shot several times but still able to get around and no mention of going to hospital or receiving any kind of treatment) and there were far too many coincidences for my liking. On a more positive note though Marc Raabe knows how to build tension as in the last quarter of the book the pace was severely ramped up as it raced to it's conclusion.

Overall I thought this was an average thriller and not one that I think can genuinely be called a psychological thriller.

With kind thanks to Bonnier publishing and NetGalley for the review copy.