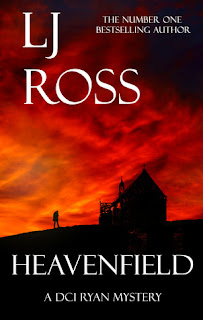 Heavenfield is the third novel in the DI Ryan series by LJ Ross and one that I couldn't wait to start reading.

When a familiar face is found dead in a church, Ryan is the prime suspect and he has to clear his name. Could it be that his old nemesis The Circle is rearing it's ugly head again?

When more bodies are discovered Ryan suspects that each victim is somehow involved with the group but the pressure is on as someone is systematically picking off the people he wants to interrogate. It's not only members of The Circle that need to watch their backs though, as someone isn't happy about Ryan digging around in things that they don't think concern him and they want him stopped.

This was an absolute rollercoaster of a novel and the pace was relentless as you got nearer to the end. The tension was almost unbearable at one point. Who would live? Who would die? Would Ryan be able to make contact with the persons of interest before it was too late and just how many people are involved in The Circle no matter how tentatively?

LJ Ross is, in my opinion, becoming more and more accomplished with each novel that she writes. The characters and plot are believable and the descriptions of the locations always manage to transport me there even though I've never been to any of these places. I would suggest that you read Holy Island and Sycamore Gap before this one though as they will give you a much better understanding of the characters.

I can't recommend this book highly enough and I'm looking forward to catching up with DCI Ryan again later in the year.