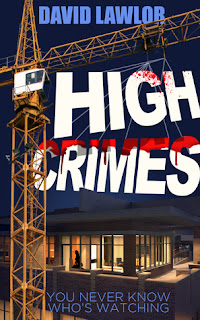 High Crimes is a contemporary mystery full of intricate twists and turns and an intriguing cast of characters.

Tommy Reynolds is a crane operator who spends his days fifteen stories up. Tommy loves his job and he also loves taking advantage of his aerial location to spy on a few select people who live in an apartment block opposite the site. His binoculars are replaced with recording equipment and then he's spending his evenings watching back the footage, getting to know their routines so that he can unassumingly manoeuvre himself into their lives, resulting in devastating repercussions for one resident.

But Tommy 'Peeping Tom' Reynolds isn't the only villain in this clever novel, there's ex-priest Cathal Mac Liam, a serial sex-abuser whose crimes have never been discovered. . . until now when these two seemingly unconnected stories weave together.

I really enjoyed reading this book. The writing is sharp and the characters are well developed and believable, especially Paddy, who I thought was the most engaging character in the novel. Despite having his own personal problems to deal with he still finds time to help out with the police investigations where he can and I felt a real empathy for him. The story is intriguing and I was compelled to keep reading to find out how the two stories were going to come together.

This is the first book I've read by David Lawlor so I didn't know what to expect, but after reading High Crimes I wouldn't hesitate to read more of his work.


With kiind thanks to author David Lawlor for the review copy.