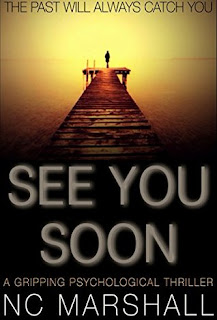 See You Soon is the second captivating psychological thriller by NC Marshall.

Emily is on her way home from work, checking her emails when she notices a name from the past in amongst her junk email. Instantly intrigued and with past memories of her old childhood friend flashing through her mind, she quickly opens the email. But this is no catch up email, sharing news of what her friend has been up to, it's quite the opposite, her old friend Alison is in trouble, she's scared and she needs someone to talk to. There's a phone number included so Emily calls it but it goes straight through to an answering machine and she leaves a message.

Several days go by and Emily doesn't hear back from Ali so she tries to forget about it, telling herself that everything must be ok now but she can't shake a bad feeling that she has so she contacts the police in her old hometown of Sandbroke and it's not long before Emily finds herself travelling back to the seaside town of her childhood that she vowed she would never return to fifteen years ago.

Once she's back in Sandbroke she encounters a few familiar faces but it soon becomes apparent that someone is playing games with her. Is it Alison herself leaving clues to help Emily find her or are they being left to taunt her by someone else who has a more sinister reason for wanting to get back in touch with Emily.

I was hooked straight away by the prologue which described someone aware that they're being followed in a busy shopping area, being threatened with a gun, a deafening bang and then they see nothing but darkness. This was definitely a story with potential and I wasn't disappointed. Emily's past was gradually revealed as well as her childhood friendship with Alison at just the right pace to make me think that I knew who was behind Alison's disappearance on several occasions only for my theory to be proved wrong not long after. The twists and turns keep coming which only caused me to read faster and faster and before I knew it I'd reached the end and all my questions had been answered.

NC Marshall is definitely an author with a very promising future ahead of her and I would highly recommend both See You Soon and her debut, Sleep Peacefully to anyone who enjoys a gripping psychological thriller.

With kind thanks to author NC Marshall for the review copy.