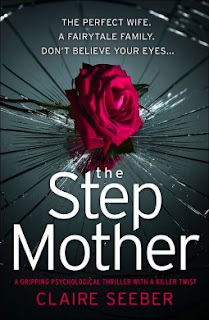 After hearing so many great things about The Stepmother I wanted to read it for myself. It's taken me a little while to actually get round to reading it but here's my review.

I really wanted to love this book, other bookbloggers I know and have similar tastes to had raved about it, but sadly for me it was a bit flat compared to other psychological thrillers I've read.

Jeanie and Matthew have a whirlwind romance and soon after getting married Jeanie and her son Frankie move in with Matthew and his two children, Scarlett and Luke. Jeanie is looking forward to a fresh start and trying to bring together her new blended family but despite her best efforts Scarlett isn't making it easy and is openly hostile towards Jeanie. Having Matthew's ex-wife Kaye never too far away isn't helping the situation either but Jeanie is determined and sure it's only a matter of time before everyone settles into their new family.

But Jeanie has a brought a secret with her and now it seems that someone close by knows about her past and wants to share her secret to watch her wonderful new life come crashing down around her. Terrified about this Jeanie gets in touch with her sister Marlena and between them they try to figure out who is behind it.

This was a story that had so much potential but for me the characters themselves let it down as I just couldn't connect with them. Jeanie drove me to distraction at times, I was reminded of the phrase 'Marry in haste, repent at leisure' and she was too weak for me. There was more than one ocassion when I just wanted to grab her by the shoulders and shout at her to grow a pair and woman up. Matthew wasn't the prince charming he started out as either, he quickly became a bully, treating Jeanie as nothing but a glorified housekeeper, taking his children's side every single time there was any friction and wasn't prepared to sit down and talk about anything, certainly not the behaviour you'd expect from newlywed. Marlena was a breath of fresh air and I looked forward to the chapters from her point of view.

Although this book got off to a slow start, once the story got going it was an enjoyable read but I felt that the ending was a little contrived and rushed. Maybe I've been reading too many books of this genre of late but for me The Stepmother didn't deliver on the level that I was expecting it to, however, I would be interested
to read another book by Claire Seeber as I did enjoy her style of writing.