The Breakdown - B. A. Paris 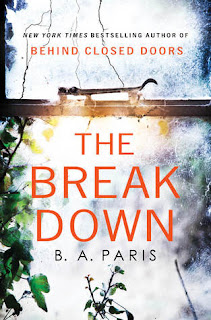 Twelve months ago I was gripped by B. A. Paris' debut novel Behind Closed Doors, so much so that it made my list of top books of 2016 so I couldn't wait to read The Breakdown. I was eager to find out if her second book would be as good as her first, but it wasn't. . . . . it was even better!!

Cass is on her way home, it's a filthy night and all she wants to do is get home. Deciding to go against her husband Matthew's advice she takes the shortcut down a dark, wooded and lonely road which will cut a few minutes off her journey, not knowing that it will be a decision she will very quickly come to regret.

Spotting a car in the lay-by she pulls up level with it to see if she can help the driver, but although she can make out a female sitting in the drivers seat, the woman makes not attempt to communicate with Cass. Not  wanting to drive off and leave the unknown woman possibly stranded, she pulls over infront of the car to see if that encourages the driver. In the short time that Cass patiently waits her thoughts run away with her and she starts to think that maybe it's a trap and that maybe someone will steal her car if she gets out. With no movement from the car behind and no mobile signal she decides that the best thing to do would be to carry on home and make a call once she's there.

When the police find out who the mystery woman is Cass realises that she knew her and had lunch with her just a few weeks before. Her husband Matthew is supportive but he's worried when Cass starts to forget things and even more worried when she voices her fears that the murderer is making silent phone calls to the house.

In my opinion The Breakdown is an exceptional book and B. A. Paris is an exceptional writer. The further I read, the more palpable the tension got and at one point I could almost feel Cass' heart racing as she struggled to make sense of her life and battled the demons inside her head. No character was safe from the finger of suspicion being pointed at them and I was totally gripped, wanting to read faster to find out how it was going to end but at the same time not wanting to finish such a compelling book. As the ending was getting nearer I could feel my lips curling into a smirk and then growing wider into a grin as I realised what was happening and for me the ending couldn't have been better, but don't worry I won't spoilt it for you all.

This book raises the bar in the psychological thriller genre and although it's only January I'm pretty confident that The Breakdown will be one of my favourite books of the year. If you only read one book this year. . .make sure it's THIS one!

The Breakdown is released on February 9th and available to pre-order here.

With kind thanks to NetGalley and publishers Harlequin UK for the review copy.