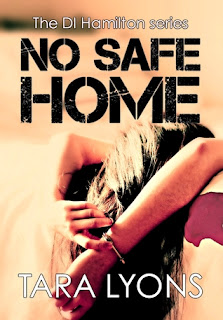 Tara's debut novel In The Shadows was a cracker of a read so I was thrilled to be asked to review No Safe Home and be a part of the blog tour.

I made the mistake of starting this book late one night when I was in bed. Why was that a mistake? Well for two reasons, firstly it was already late and after reading the prologue and the first few chapters I didn't want to put it down and the second reason. . . . it freaked me the hell out! Sleep wasn't going to come easy once I put my kindle down that was for sure.

DI Denis Hamilton is investigating the case of a young girl's suspected overdose but her parents don't believe that their daughter would commit suicide and they're certain that she was murdered. This is something that's too close to home for Hamilton to deal with and he finds himself being haunted by his past, something which he has tried to keep hidden from his colleagues.

Katy is a single mother with a young son, Frankie, and it's evident that she's scared of something or someone. Her home should be her sanctuary but she doesn't really feel safe and she trusts no-one. Working as a barmaid in a local pub gives her a small sense normality but she rarely lets her guard down.

This is a worthy and assured second novel from Tara, who in my opinion is going from strength to strength with her writing. I think that DI Hamilton is a great character and I enjoyed finding more about his back story and finding out a little about what makes him tick. All of the characters are believable and the introduction of rookie cop Rocky, who has quickly made a big impression on the team, seems like he could be an interesting addition to the team.

All in all No Safe Home is a fast-paced, at times breathtaking novel, which although is the second book in the series could very easily be read as a standalone. With short, punchy chapters, it's definitely one of those books where you constantly find yourself muttering 'just one more chapter' and I'm already filled with anticipation for the next book in the series!

You can follow the rest of the blog tour on these great blogs: 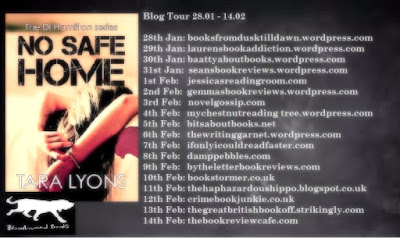 With kind thanks to Helen Claire at Bloodhound books for the review copy.