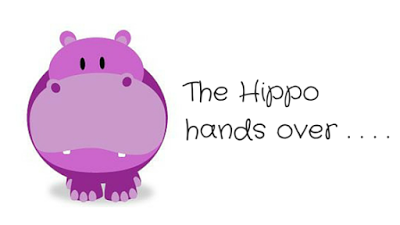 Today I'd like to welcome author Carol Warham to The Hippo and to wish her a happy publication day! Carol's debut novel Resolutions is published today so I thought it was the perfect time to invite her over so that you can all get to know her, find out about her book and find out about her journey to publication.

So I'll hand you over to Carol and let her introduce herself.

I have written since childhood, having started by making small comics for my dolls, enjoyed writing ‘compositions’ in school and progressing to training as a journalist for a short while.  However life took a different turn and like most, particularly of my generation, I got married and had a family of two daughters. During that time I held down a few different jobs, from working for the taxman to working in our own businesses. Once the family had grown up I settled down to writing short stories, poems and holiday articles, many of which were published.

In recent years I’ve been delighted to be a judge in the short story section for the HysteriaUK competition and also to read for the RNA’s romance novel of the year. I am reading for them this year, ready for the 2018 awards.

In my spare time, when not helping with the grandchildren, I go to the gym, and belong to various village groups, like the reading and walking groups.  I run a small but enthusiastic writing group which meets in the village library. Last year we held a successful children’s writing competition which was sponsored by Central England Co-operative. Book tokens were presented as prizes and the entries displayed at the village library

Recently I represented the book group on BBC Radio Leeds, a number of times, talking about books and the work on my novel.

As the date set for the publication of RESOLUTIONS, my first novel, draws near, I have been asked lots and lots of questions by other newbie authors and many readers.

Many of the questions relate to how I came up with the idea for the novel, its name and the choice of location. Others have asked about how long it took to write and my ‘journey’ to publication.
Other questions have been more personal about how and when did I first know I wanted to write.

Neats has kindly given me the opportunity to answer some of these questions as best as I can.

Initially I’d like to talk about RESOLUTIONS, that’s the part I’m most excited about.  Never in a million years did I believe I could write a novel, at least not one that would be accepted for publication.

So, where did the idea come from? Some years ago, we were on a family holiday to Florida and visited the town of Celebration. For those that don’t know it, it’s a master-planned community, a town specifically designed to integrate everything a community would need and developed by the Disney Corporation.

I was fascinated by the idea of the town and the stories that could develop there. It was then my idea of a town called Resolution developed with a plot that centred around New Year. A time, we think of, for making resolutions and maybe resolving past upsets and misunderstandings.

Great, I had an idea, now all I had to do was write it! At first, I tried to set the story in the U.S. simply as I wanted to call the town Resolution. We would never have a town with that name in the U.K.

Unfortunately, it didn’t work for me. Friends, who were honest, read the first draft and said I didn’t capture the American culture or language at all. The advice I was given was to move the location closer to home. I was very disappointed and for a short while resisted the idea. However, I had to agree, eventually, this was the best way forward. Finally I decided to use the town of Holmfirth as a blueprint for the new location of Yeardon and call the local hotel, which has a prominent position in the plot, Resolution Hotel.

Holmfirth is just three miles from where I live. Many people will know it, at least from watching the television series, ‘Last of the Summer Wine’, which was filmed there and amidst the surrounding, stunning countryside.

This all happened five years ago. Since then, there have been at least three drafts and numerous re-writes of large sections and chapters. There have been many times when I could have thrown it in the bin…had it not been a computer file! Happily, I did resist from deleting all the files.

About two years ago a good friend, a brilliant author in her own right, asked to look at the manuscript.  I was stunned when she came back to me, saying yes it needed work and editing but there was a great story there and I ought to work on it. Out it came, once more. This time I had someone, advising, cajoling, supporting and giving the occasional much needed boot.

Eventually the time arrived when it was as ready as possible to submit it to publishers. Fingers crossed and breath held I pushed the send button.  Three publishers showed interest but after listening to advice and recommendation, I signed a contract with  Kemberlee Shortland’s Tirgearr Publishing, who have also proved to be professional, supportive and always available for advice.  Their talented Elle J Rossi, is responsible for the wonderful cover, for which I have received many compliments.


I can see why Carol has had lots of compliments for her cover, it certainly caught my eye! What do you think about it? 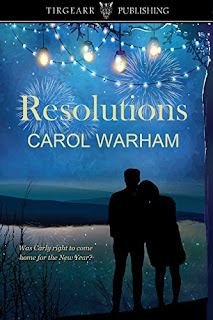 
Resolutions tells the story of Carly Mitchell who returns home, to the fictional town of Yeardon, a few days before New Year. She comes back to the small town, on the edge of the Yorkshire moors, which was once her home. A year earlier, she had fled, leaving her bridegroom and friends bewildered. Her intention is to spend a couple of days to make her apologies and offer an explanation for her action.

She meets with mixed reactions, ranging from curiosity to open hostility. However when an emergency arises Carly agrees to change her plans and stay for a longer period.  Falling in love with the new local doctor, Ben Thornton, was not part of her original plan either. Especially when it appears his past is shrouded in mystery.

Complications and tensions increase during the town’s New Year celebrations and she begins to doubt whether she has done the right thing.

Will Carly find the resolution she needs to overcome the challenges facing her or will she run away again? You’ll need to buy the book to find out!

Resolutions is currently available to download for just 99p until Sunday, so, as it's Book Lovers Day why not show Carol some book love and support a new author.

You can find out more about Carol and connect with her using the links below:

I'd like to thank Carol for taking the time to stop by today and to wish her lots of luck with her novel.