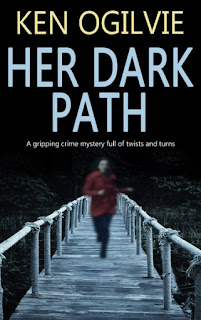 I’m delighted to be today’s stop on the blog tour for Her Dark Path with a guest post from the author Ken Ogilvie.

16 years ago Rebecca Bradley’s mother was murdered. Rebecca was only eight years old. The killer has never been caught. Growing up, Rebecca vowed that one day she would track him down and make him pay.

Now Rebecca is a young police woman in Ontario. She wants to become a homicide detective. Her first investigation is the cold case of a woman who vanished for 16 days and then was found dead in her own home. The brutal crime shocks the small Canadian town of Conroy.

The puzzling case has uncanny similarities to the murder of Rebecca’s mother. Both victims were found strangled in their own kitchens.

Can Rebecca keep her emotions together as she closes in on a killer with connections to her family and tragic past? And will she finally get justice for her mother?

Discover a new crime writer who will have you gripped till the pulsating end.

I’m currently an independent environmental policy consultant, working from home in Toronto, Canada, although I’m on the road a lot. I still mostly write fiction in the early morning, and edit it later in the day. Recent consulting contracts of mine include preparing a case study designed to be used by the Said Business School, University of Oxford, on the province of Alberta’s recent transition towards being a climate policy leader in Canada, and I’ve done research and ran workshops on the creation of a new Canadian Energy Information Organization. I serve on the Boards of Directors for two leading environmental and energy organizations – the Pembina Institute for Appropriate Development, and Quality Urban Energy Systems of Tomorrow (QUEST). And when spare time and suitable opponents permit, I play the odd game of chess, which was a passion of mine in younger days.

I wrote Her Dark Path because a couple of decades ago I was reading a mystery novel that I suddenly snapped shut and declared, rather too vehemently, “This book is crap! I could write a better one.” I forgot about that bold (and somewhat rash) declaration for many years and focused all of my energy on my career in three Canadian governments (Federal, Ontario and Manitoba) in the environmental policy field. In 1995, when I became the Executive Director of Pollution Probe, a Canadian environmental organization created in 1969, I found myself working 24/7. The job was all-consuming, and I felt that I needed a distraction of some sort. Watching TV didn’t work, because I was tired at the end of long working days and would nod off. I tried reading books, but they just put me to sleep faster. Then I recalled what I’d said years ago about how I could write a better book. I challenged myself and got up early the next morning. By 6 a.m. I was sitting in a coffee shop with my computer booted up. I started working on a science-fiction novel – not a mystery, because I had mostly read science fiction in my youth, and only later read mysteries when I had the inclination during my busy career.

I began my fiction writing as a novice, but I had extensive writing experience in technical and policy areas, and I was a ferocious editor of staff reports at Pollution Probe. Novel writing would come naturally to me, or so I thought (incorrectly). I wrote half of a really crappy science-fiction book, and then struggled over whether to continue. But I’m not a quitter, so I shelved that book for the time being, took a deep breath, and hit the reset button. I started working on a mystery. My parents grew up near the south shore of Georgian Bay, Ontario, so I set my book close to there, just off the eastern side of that massive bay (which is about 80% of the size of Lake Ontario, one of the five Great Lakes). I grew up in small towns in southern Ontario, until high school, so I decided to create my own small town, which I named Conroy. I made it a dying town and not very picturesque, like Louise Penny’s Three Pines, although it’s surrounded by the stunningly gorgeous landscapes of Georgian Bay (rocky, wind-swept shorelines that inspired The Group of Seven artists) and the tens of thousands of sparkling lakes dotting the Canadian Shield in the Muskoka area are not far north of where I set poor little boring Conroy (on the surface). I moved against the heavy flow of mystery novels that feature older, heavy-drinking detectives having marital and other family problems, and made my protagonist young (Constable Rebecca Bradley, 24 years old). The plot of Her Dark Path is fairly intricate and ended up with a story arc that will continue into future books. I hadn’t initially set out to write a series, although the first book contains a complete story in itself. But enough on that subject – for more, you’ll have to read the book!

You can follow the rest of the tour on these fabulous blogs:

With kind thanks to Jill at Books n All for asking me to take part in the blog tour.
Posted by Neats at 07:00