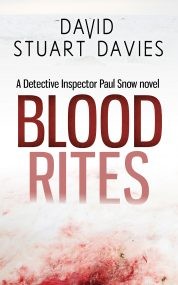 I'm delighted to be today's stop on the blog tour for Blood Rites by David Stuart Davies.

Blood Rites is a Northern thriller set in Huddersfield, Yorkshire in the 1980s featuring Detective Inspector Paul Snow. DI Paul Snow has a personal secret.   He is a homosexual but is desperate to keep it secret, knowing it would finish his career in the intolerant police force of the time. As this personal drama unfolds, he is involved in investigating a series of violent murders. All the victims appear to be chosen at random and to have no connection with each other. After the fourth murder, Snow is removed from the case for not finding the killer but continues investigating the matter privately. Gradually, Paul manages to determine a link between the murder victims, but this places his own life in great danger. Can Paul unmask the killer as he wrestles with his own demons?

Just to whet your appetite a little bit more David has very kindly written a post that gives a peek into the main character, DI Paul Snow.

Paul Snow is the main detective character in my ‘Northern Noir’ Blood trilogy, which consists of Brothers in Blood, Innocent Blood and the latest, Blood Rites, published by Urbane Publications in November 2017. The books are set in the 1980s in Huddersfield, Yorkshire, a town I know well as I have lived there all my life.

In essence Paul is a self-contained solitary character who is dedicated to his job. He has one secret that controls much of his life and actions: he is gay. Because of the culture of the times in which the novels are set and particularly the attitude of the police authorities during the 1980s, Paul is desperate to keep his sexuality a secret. He knows that he would not have risen to the rank of Detective Inspector if it had been known that he was ‘a shirt lifter’. After some sexual experiences in his youth, Paul has now become determined to lead a monastic existence, to curb his natural feelings and focus all his energies into his job. Although he knows that this is easier said than done.

In the first novel, Brothers in Blood, he encounters an old boyfriend during a murder investigation, which raises an inner conflict, one which he thought he had mastered. At the same time he falls foul of a fellow officer who is blackmailing him. At all times, while involved in investigating violent crimes, he has to fight to keep his emotions in check and hide the truth of his true nature from the world. This, I believe, gives an extra dramatic dimension to the narrative and certainly the resolution of this first book is shocking in the extreme.

In the second in the series, Innocent Blood, during his investigation Paul meets a young woman, Matilda, for whom he has some affection. He likes her and they get on well. Reluctantly he asks her out. On one level he realises that he is using her as his ‘moustache’ – a term used by gay men for women who give them heterosexual ‘respectability’. However, Paul really likes Matilda, a secondary school headmistress, and feels warm towards her – but in essence his affection is platonic rather than sexual. He is aware that in the long term this relationship cannot go anywhere and this preys on his conscience. Certainly, for him, marriage would be the ultimate deceit. He is too decent a person to go down that road. Complications arise when he is propositioned by a fellow officer and he has to deal with this dangerous scenario while investigating the kidnap and murder a group of children who were members of a youth choir.

In the final novel in the trilogy, Blood Rites, while Paul is searching for a serial killer who seems to be picking off his victims at random, Matilda is pressing him to take their relationship to the next level. Matters grow more complicated when her estranged gay brother turns up and takes a fancy to Paul. Once again his feelings are in turmoil, leading to a heart stopping climax.

If you were to meet Paul Snow, you would encounter a tall, slim man in his mid to late thirties, with a neat haircut, dressed smartly but conventionally in a dark blue suit, white shirt and blue tie. Your first impression would be of a quietly spoken, diffident individual, but on closer acquaintance you would become aware of his sharp mind, gentle humour and an air of self-sufficiency.  He has no camp mannerisms or any of the overt trappings that some gay men possess, but a perceptive observer may notice his gentle demeanour, ease of movement and a lack of that tough ‘manliness’ that some might expect from a seasoned policeman.

As a character, I am very fond of him and admire the way he attempts to cope with his dilemma and I understand fully when he falls by the wayside. Although I am not gay, I think I have enough understanding of the trauma someone like Paul undergoes and sufficient creative imagination to present him as a realistic and fascinating protagonist. And of course, despite any flaws that he might have, he is a brilliant detective and, to me, a very interesting human being with a story that makes you care about him.

He is a committee member of the Crime Writers’ Association and edits their monthly publication Red Herrings. His collection of ghost and horror stories appeared in 2015, championed by Mark Gatiss who said they were ‘pleasingly nasty.’

David is General Editor of Wordsworth’s Mystery & Supernatural series and a past Fellow of the Royal Literary Fund. He has appeared at many literary festivals and the Edinburgh Fringe performing his one man presentation The Game’s Afoot – an evening with Sherlock Holmes & Arthur Conan Doyle. He was recently made a member of The Detection Club.

You can find out more about David and his books by using the links below: 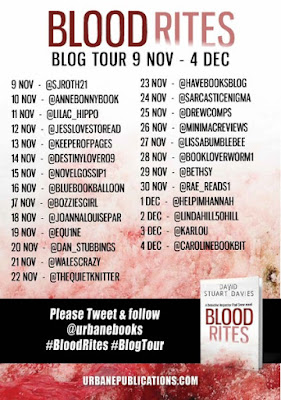 With kind thanks to Abby over at Anne bonny book reviews for inviting me on the tour and to author David Stuart Davies for the insightful guest post.
Posted by Neats at 06:00