#Blog Tour - We Have Lost The Chihuahuas - Paul Mathews 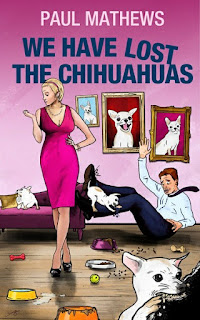 Thanks to the lovely Emma Mitchell I'm delighted to be on the blog tour for We Have Lost The Chihuahuas today with a Q & A with the author Paul Mathews.

Before I chat to Paul let me tell you a bit about his new book and the man himself.

London, 2046. The British Republic has a new First Lady. She’s Californian, ‘in-your-face, for sure’ and she’s got big plans for a Buckingham Palace refurb. When her three Chihuahuas go missing, one man is determined to avoid getting dragged into it all. His name is Pond. Howie Pond – presidential spokesperson, retired secret agent and cat lover.

Meanwhile, Howie’s wife Britt is handed her first assignment as a National Security and Intelligence Service rookie – to solve the mystery of the missing canine trio.

Will Howie manage to slope off to the pub before he can be roped into help? Will Britt unmask the dognapper and grab the glory? Find out, in the latest, crazy comedy-thriller from dog-loving British author Paul Mathews.

Paul Mathews is a quite funny British guy who's managed to escape his day job and is currently on the run as a comedy novelist. His sharp, satirical - often surreal - sense of humour draws on 20 years as a British Government press officer, during which time he encountered politicians, senior civil servants, HR managers, and lots of other people who really sucked at their jobs.

His popular 'We Have Lost' comedy-thriller series set in 2040s London, starring beleaguered presidential spokesman and wannabe secret agent Howie Pond, currently comprises four titles with more on the way. Paul has read all the books at least ten times and highly recommends them.

Make him happy by signing up for his 'Very Funny Newsletter' here. If you don't want to sign up for it, stay calm and do nothing.

Paul also owns a cat, Lulu, who works as his assistant. All fan mail to her, please.

What is the first book you remember reading or having read to you?
I remember those Janet and John books at Infants School but not much else. In later life, I also remember reading Dr Who books and really loving comics. My brother and I put the comics we’d read in a box under the bed and re-read them before bedtime. It probably explains why I’m a comedy writer!

Who is your favourite literary character?
Marvin the Paranoid Android from the Hitchhiker’s Guide to the Galaxy – I think we all feel a little like Marvin sometimes.

Which book have you always meant to get around to reading, but still not read?
Catch-22 by Joseph Heller – its title inspired a phrase still in use today. I’ve seen some bad reviews of it, so I don’t know whether it’s stood the test of time. But everyone gets bad reviews – even me!

If you could only take one book with you on a desert island, which would it be?
Any large encyclopedia that floats.

What are you currently reading?
I’m 25% of the way through a Douglas Adams biography. It’s brilliantly researched and, therefore, extremely long. It’s fascinating how he took comedy ideas from his student days and worked them into his writing.

I'd like to thank Paul for taking the time to answer these questions. We Have Lost The Chihuahuas will be published on the 28th of November and it's available to pre-order here.

You can find out more about Paul and connect with him using the links below: 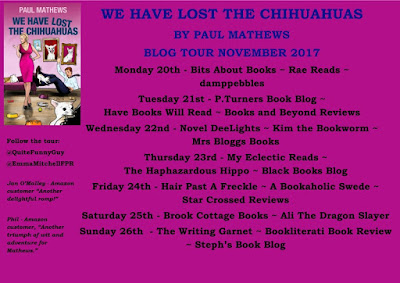