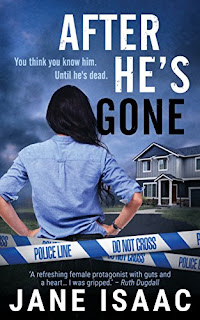 It's been far too long since I've had the pleasure of reading a book by Jane Isaac so I was delighted to be offered a review copy of her latest novel After He's Gone which is published today.

Cameron swift is gunned down on his driveway early one Sunday morning. Initially the police think that it has all the hallmarks of a contract killing but then a photograph of the victim, taken at the crime scene, appears on Twitter with the message 'Who was #CameronSwift #bbcnews #c4news #itvnews' The picture had to have been taken by the killer but what exactly are they insinuating with their words as it seems to be suggesting that Cameron wasn't who everyone thought he was.

DC Beth Chamberlain is appointed as the family liaison officer. There to not only support the family but to try and uncover any useful information to help the team to catch Cameron's killer, it soon becomes apparent that Cameron had a lot more going on than anyone who knew him could have imagined!

Although After He's Gone is a police procedural, I loved the fact that it concentrated on the Family Liaison Officer as opposed to a detective and this for me was a refreshing change. I loved Beth's character right from the outset and grew to love her even more as I read on and found out more about her both in her personal life as well as professional.
This is a story about family, relationships and the secrets that people keep and it begs the question. . . . just how well do you really know someone? Clearly Cameron Swift was a character with many, many secrets and until his untimely death, he managed to keep them all extremely well hidden.
After He's Gone is a fantastic start to a new series, it was jam-packed full of red herrings and superbly written and I raced through it in a little over a day. I can guarantee that I won't leave it as long to pick up another book by Jane Isaac and I'd highly recommend this one to all fans of crime thrillers.