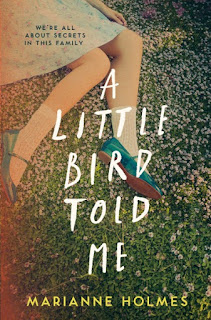 It's the summer of 1976 and nine-year-old Robyn and her older brother Kit are spending most of their time at the Lido and the park with their friends.

The two children live with their mother Jemima and stepfather Matthew but it's Robyn, also known as 'Little Bird', who witnesses an incident at their home involving their mother, an upset neighbour with her young son and an irate husband. Add to this, a tall stranger wearing a cowboy hat seemingly always in the background and it's not only the weather that's making the atmosphere uncomfortable. Everyone in the town feels that Jemima is meddling in things that don't concern her and life becomes more than a little awkward.

Fast forward to 1988 and Robyn has persuaded Kit to return to their old neighbourhood and house as she needs answers to the questions that have been spinning around in her head for the last 12 years. Kit knows that digging about in the past is bound to rekindle all the bad feelings from the past but he won't let her deal with whatever awaits her alone.

Initially I found this a little difficult to get into.It took me a while to warm to the characters and at times I found it confusing to follow. Looking back at it now as I'm writing my review, I don't actually think that it was me that was confused, I think it was because I was seeing things through Robyn's eyes, as was the author's intention. The adult world is confusing enough for a child to try and understand but when the adults are blatantly hiding and lying about things it's no wonder the poor girl was confused.

A Little Bird Told Me is a beautifully written tale of mystery that's packed with nostalgia. Marianne Holmes is definitely an author to watch and her descriptive style is one of the best I've come across in a debut novel for a while. An intriguing tale of family secrets and the long-lasting impact of keeping them hidden.


Marianne Holmes was born in Cyprus to RAF parents and bounced between the UK, Germany, Kuwait and Belgium until firmly basing herself in London – well, apart from those years in the Peak District.

A love of language led to degrees in Classics and Linguistics from the University of London but her desire to pay the mortgage steered her to a career in Marketing. After distracting herself in all sorts of ways over the years – sailing, flying, volunteering and running away to India – she is now definitely, absolutely concentrating on her writing. Well, that and making sure her children get fed, clothed and entertained. Obviously.

A Little Bird Told Me is Marianne’s first novel.

You can follow the rest of the blog tour with these great blogs: 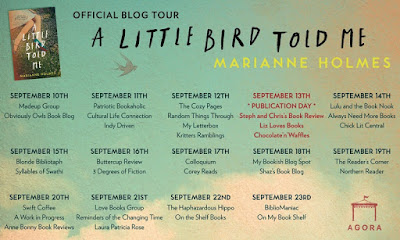 With kind thanks to Oliver at Agora Books for the review copy.