Blog Tour - You Belong To Me - Mark Tilbury 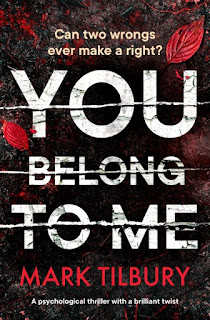 I always get excited when I hear that Mark Tilbury has a new book coming out as I know that I'm in for a treat and You Belong To Me is no exception.

When Danny Sheppard hears that a young girl called Cassie has gone missing on her way home from school he reaches out to friends that he hasn't seen for years. He's worried that he knows what's happened to her as the circumstances surrounding her disappearance are eerily similar to that of another girl called Ellie who disappeared ten years previously and was never found.

All of the friends that Danny reaches out to are troubled in their own way and this can be traced back to their childhood and an events that links them to a time that they would all rather forget so Danny doesn't know if they will agree to confront their demons and help him.


I'm a huge fan of Mark Tilbury's books - I would call myself his number one fan but I don't want to be compared with Annie Wilkes in Stephen King's Misery - but I was a little bit worried when I heard that You Belong To Me was going to be missing the supernatural element that I've come to know and love in his books. Well let me tell you, there was absolutely nothing lacking at all, it was just as dark, sick, twisted and disturbing - so I loved every single page. With the story being told in the past and the present, it was great way to give an insight into the characters of Danny, Rob, Kieran and Josh when they were young and to show how they have all been affected by the events of ten years ago. Mark's books always have that one character that makes my skin crawl and manages to sneak into my dreams and in You Belong To Me that character was Danny's brother Calum. It got to the point where I was dreading seeing his character appear, he was THAT despicable! it's often said that authors base their characters on people that they know and if that's true in Calum's case than Mark needs to seriously consider getting some new friends!

You Belong To Me is a triumph of a book and his reputation for writing some of the best twisted thrillers I've ever read is definitely intact!

Mark lives in a small village in the lovely county of Cumbria, although his books are set in Oxfordshire where he was born and raised.

After serving in the Royal Navy and raising his two daughters after being widowed, Mark finally took the plunge and self-published two books on Amazon, The Revelation Room and The Eyes of the Accused.

He's always had a keen interest in writing, and is extremely proud to have had six novels published by Bloodhound Books, including his most recent release, You Belong To Me.

When he's not writing, Mark can be found trying and failing to master blues guitar, and taking walks around the beautiful county of Cumbria.


You can find out more about Mark, his books and connect with him using the links below:


Check out the rest of the blog tour with these fantastic blogs: 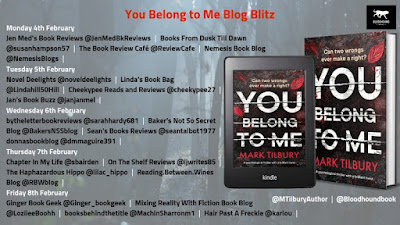 With kind thanks to Bloodhound Books and author Mark Tilbury for the review copy.
Posted by Neats at 08:59